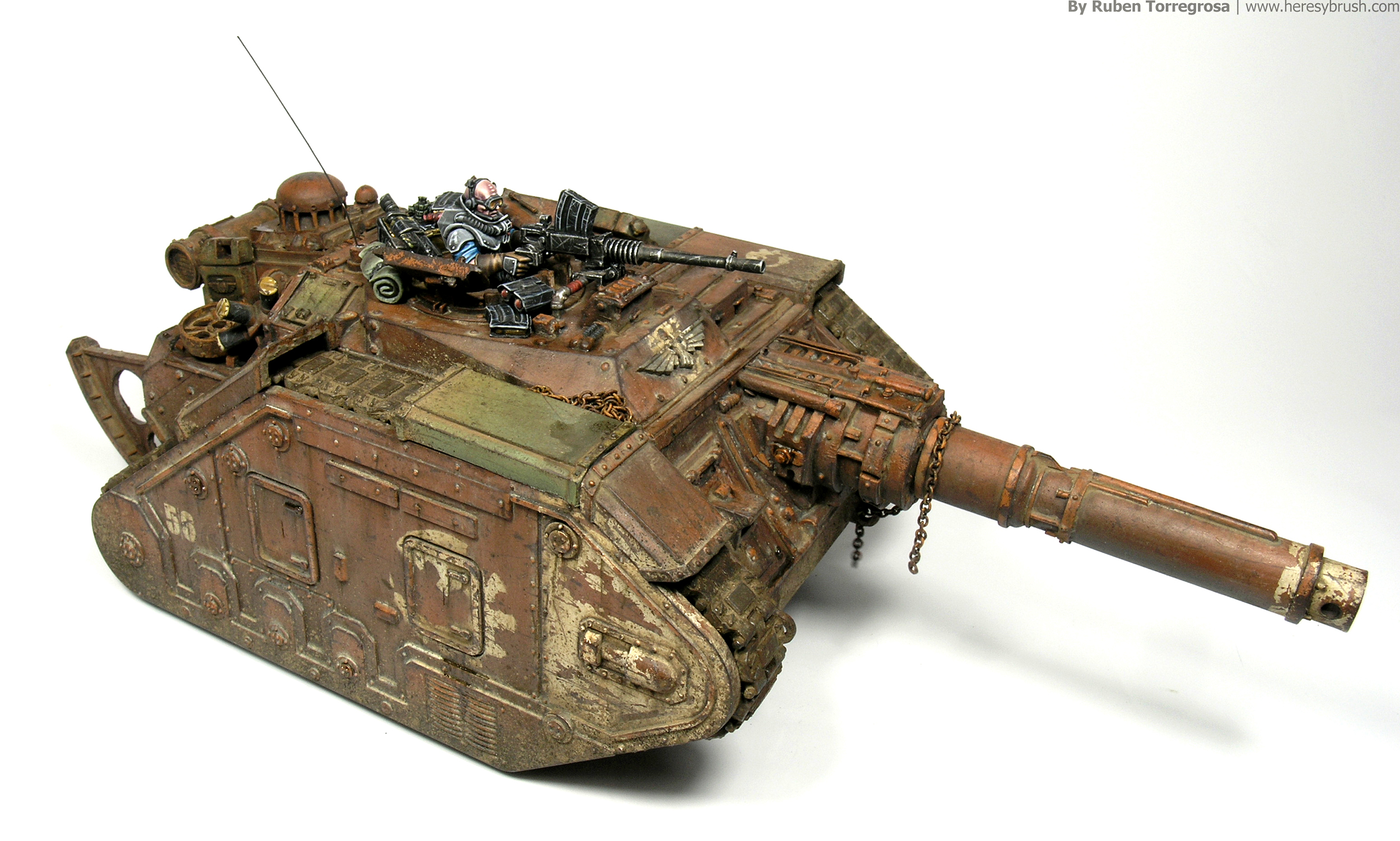 After couple of years, I finally manage to finish the second Leman Russ tank for my Genestealer Cult army. This is another beautiful model from Forge World. It is a Leman Russ Destroyer, a tank hunter. To maintain certain coherence with the previous Leman Russ Mars I painted, I added air filters and the rear extension to cross trenches from another Forge World kit, as well as some track armour pieces. Choosing the painting scheme was not easy. I did not want to exactly repeat the same green color I previously used. After asking around and checking different sources for inspiration, I finally decided to follow something rather easy: follow the trend of the what if tanks of the WWII. That is, German red primer. My initial plan was to work on some dust effects, although I think that I went to far at the end. However, even do the dust effects are a little bit too heavy, they nicely fit with the lore of this army: the Cultist accumulate weapons and tanks during years until the uprising in the given planet is initiated. Therefore, this tank might have been hidden in a garage for years and years until finally some Cultist needed some heavy support to defeat the Planet Defence Forces. Although I did not take proper photos of the process, I still got something with my phone. I would like to share with you this painting guide along with some hints, which I hope will be useful for you. 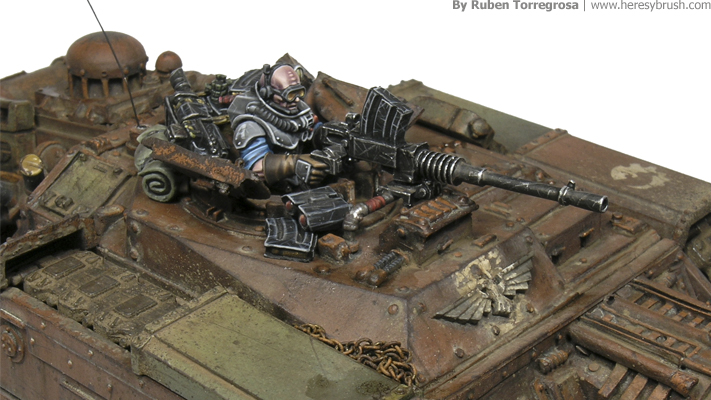 First of all, I encourage you to check this other guide to have a better idea about what to do. In the following lines, I will just briefly explain some things I think might be useful. Second, this is the list of paints and products I mostly used. Notice that I used acrylic paints for the basic colours of the tank and enamels for the weathering effect. Remember to apply a varnish layer before applying any enamel product!

It is important to wash with water and soap the resin parts of the kit, so that we will remove the traces of the mold release agent. If you find some bended resin parts, you can easily straighten these by heating up them either with a hairdryer or by dipping them in ho
t water. On the other hand, in my case I used some white plasticard (from Evergreen) to cover some holes or add extra details. 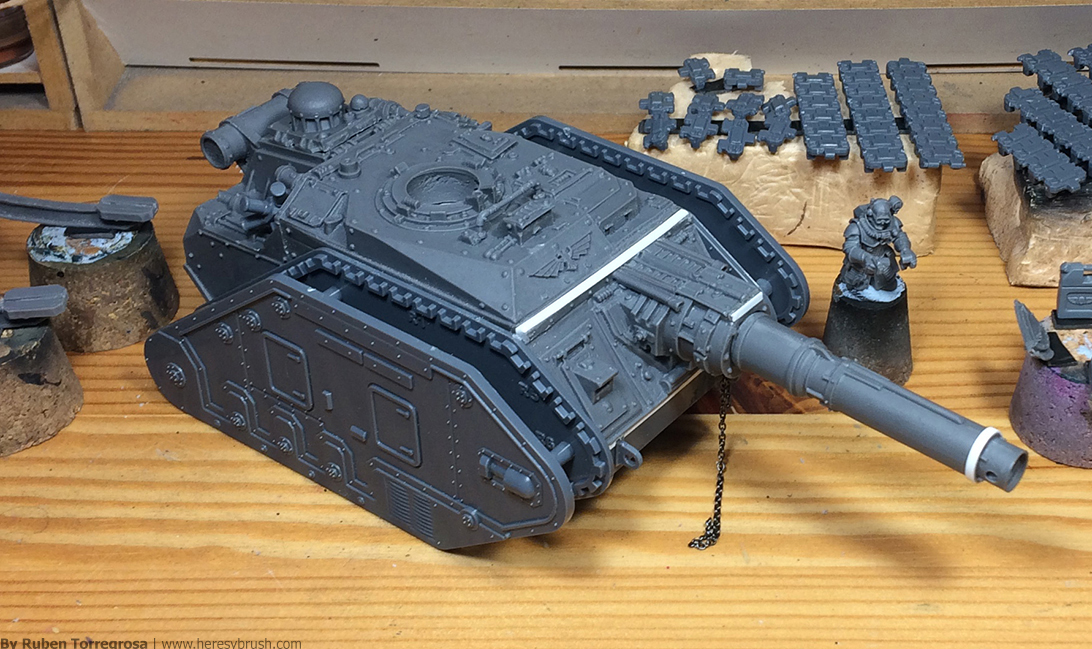 I applied the black primer from AMMO with an airbrush. I airbrushed two thin layers and let it dry overnight. Be sure that everything is properly covered with the primer. 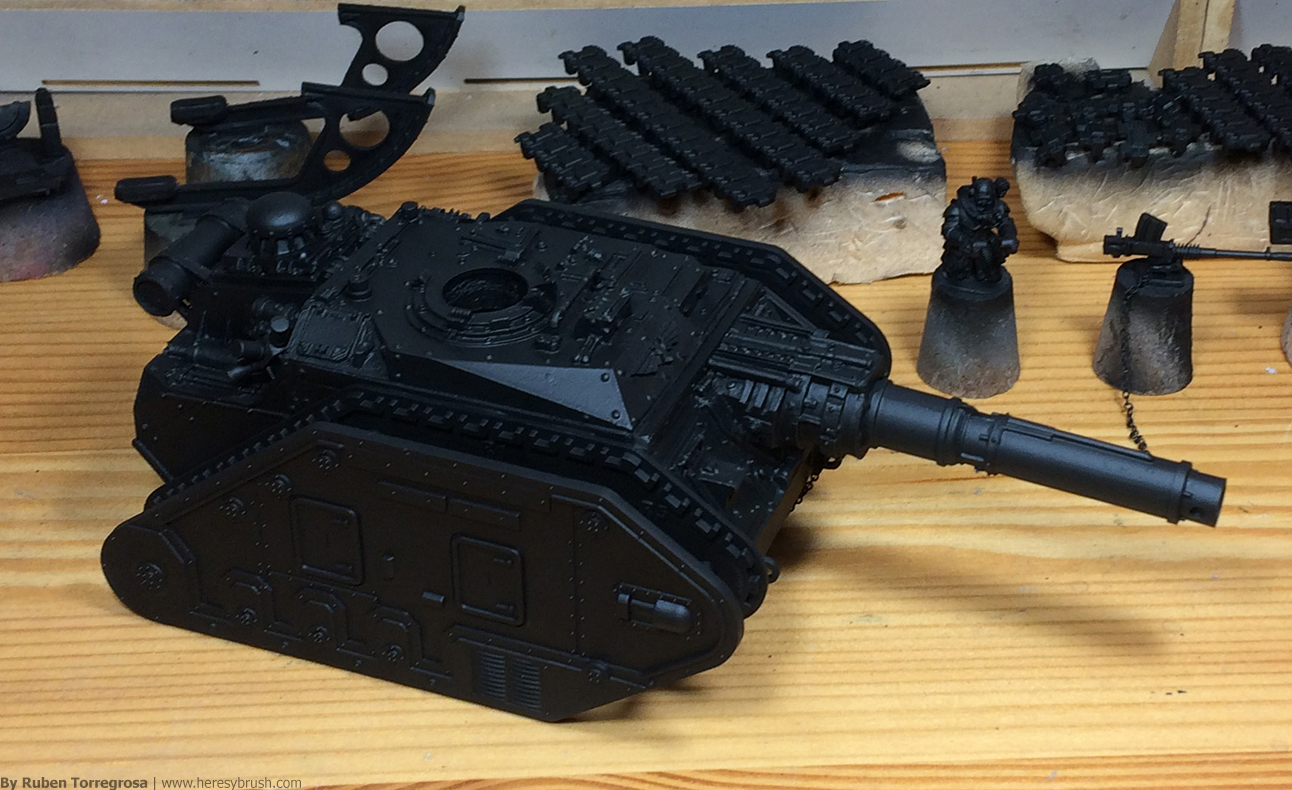 I applied the first base color, Red primer Dark Base A.MIG-0919, with a 0,22mm Renegade Krome airbrush from Badger. Although we can airbrush AMMO paints straight away, I usually thin everything is going into the airbrush with the corresponding thinner. 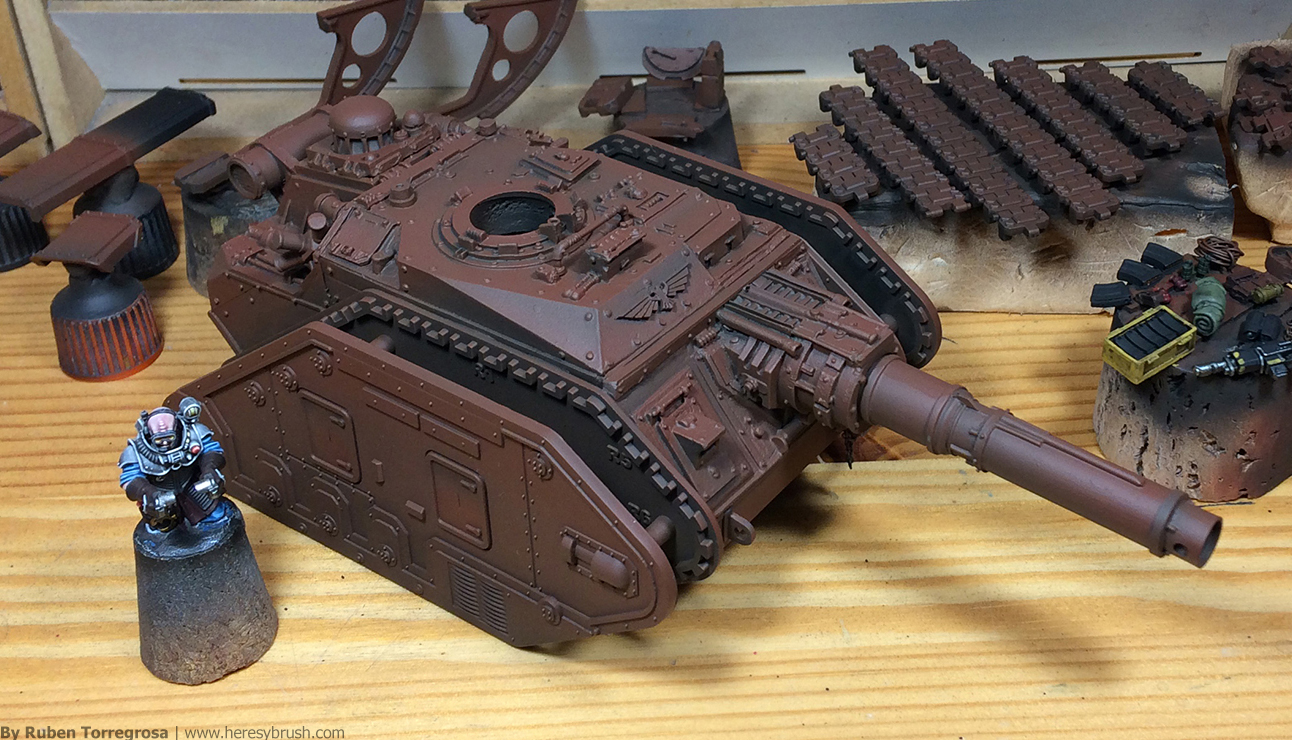 For the highlights, I normally follow the “Color Modulation” method, although you can use whatever you prefer. I also painted some green panels using the same recipe I used in my previous Leman Russ. The idea was to simulate that my Cultists have cannibalized other vehicles in order to fix or replace spoiled elements. 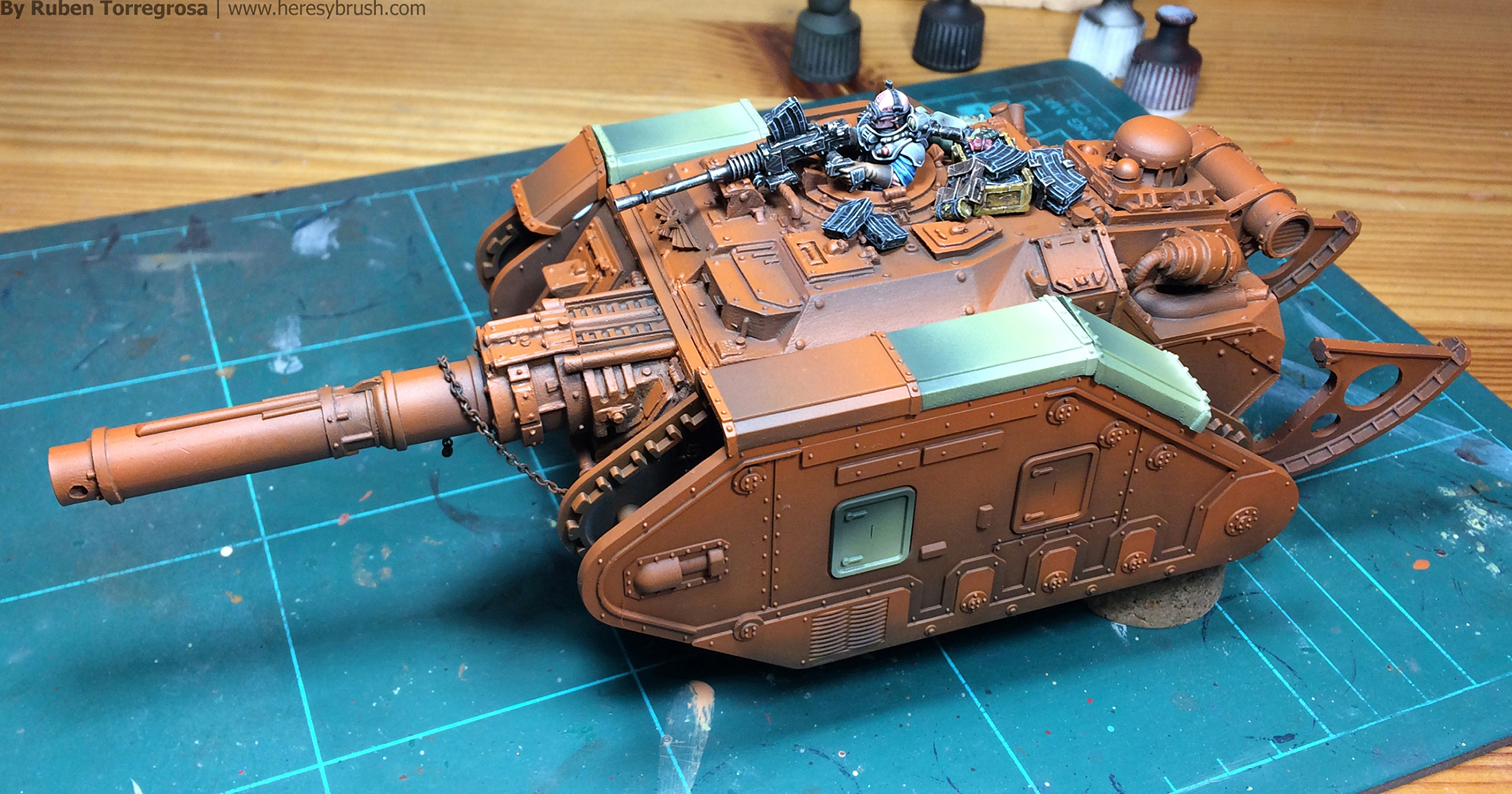 The last highlight is applied with a brush on all the rivets and small details. The rationale behind this is to enhance the contrast of flat surfaces. In addition, similar to the previous Leman Russ, I used the hairspray technique to paint the regiment or tank marks based on white lines. 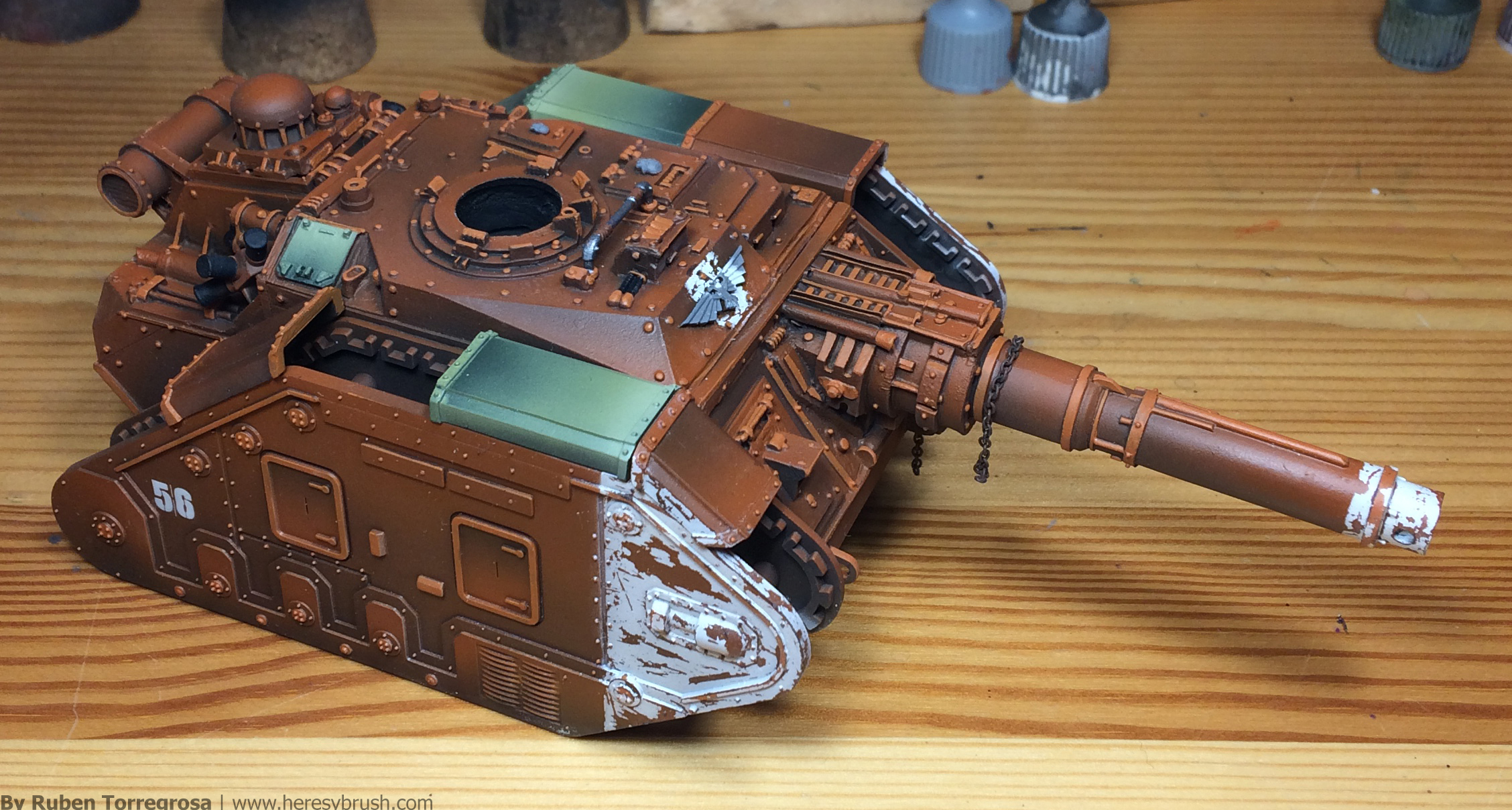 Using some stencils from Skumb4g kustoms, I painted the Genestealer Cult symbol. I also use stencils for the “56” number. When using stencils, it is very important to be sure that this is properly attach to the surface. I also use the hairspray technique on these. 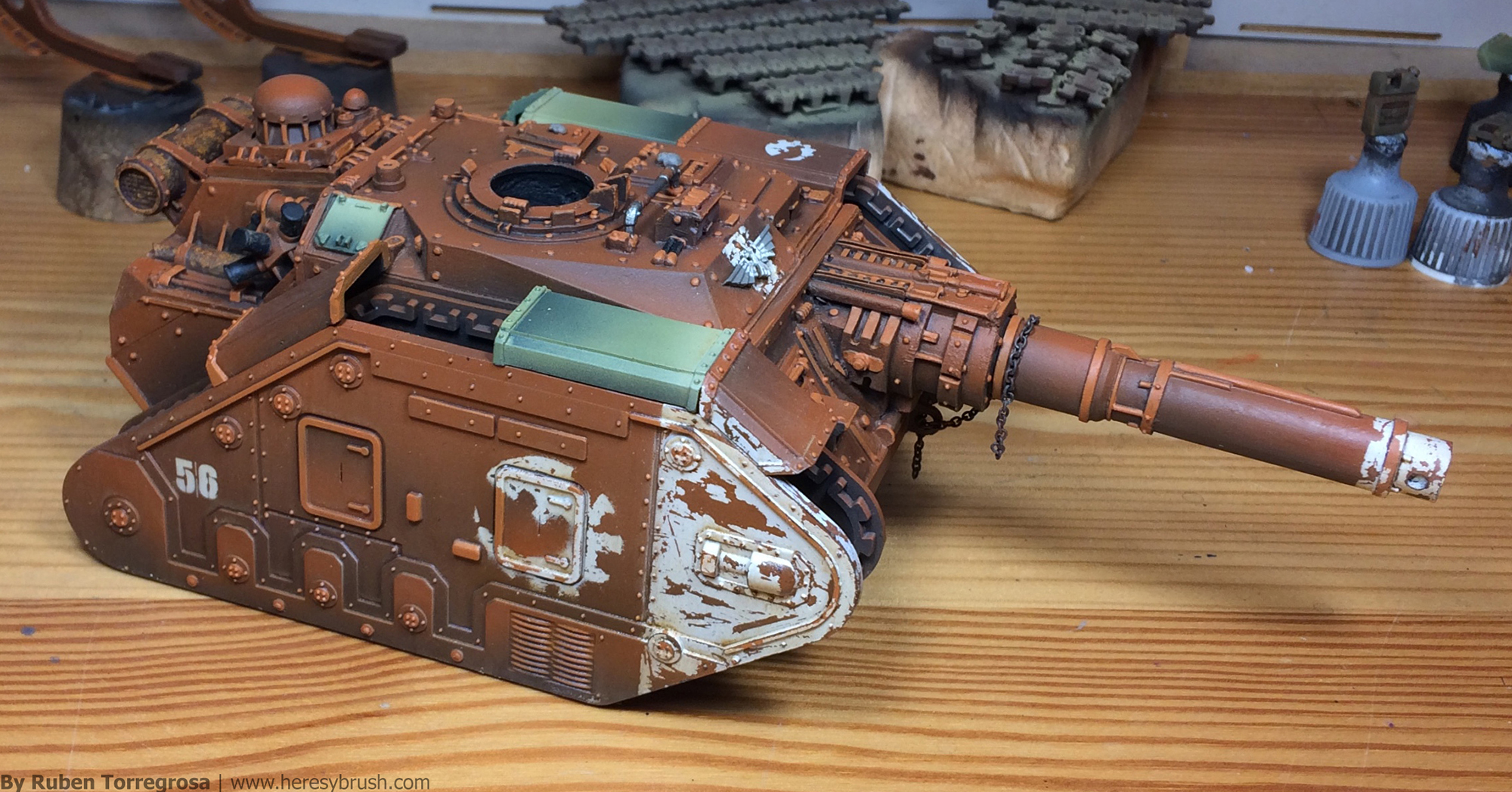 To enhance all the recesses, we apply a pinwash with the enamel Dark Brown (A.MIG-1005). Remember to apply a varnish layer before starting with the enamels. Let it dry for 30 min and then remove the excess with a brush moistened with White Spirit. 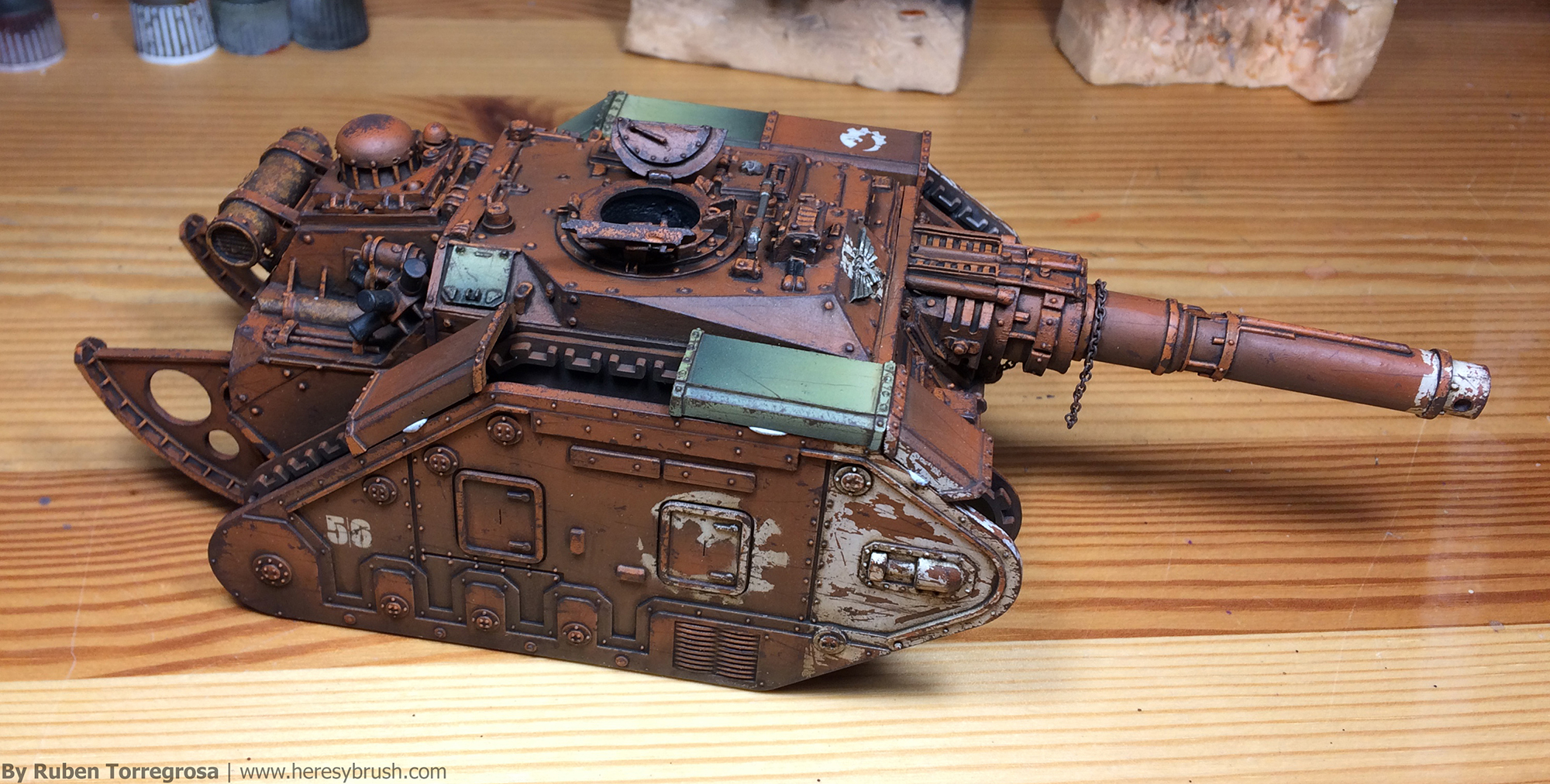 We apply the chipping effects using only one color, a dark brown such as Chipping A.MIG-044. I used the sponge technique for the general chips and a thin brush for the scratches. Try to randomize the way you paint them and focus on those areas that are more exposed or are more expected to be worn out such as handles and hatches. 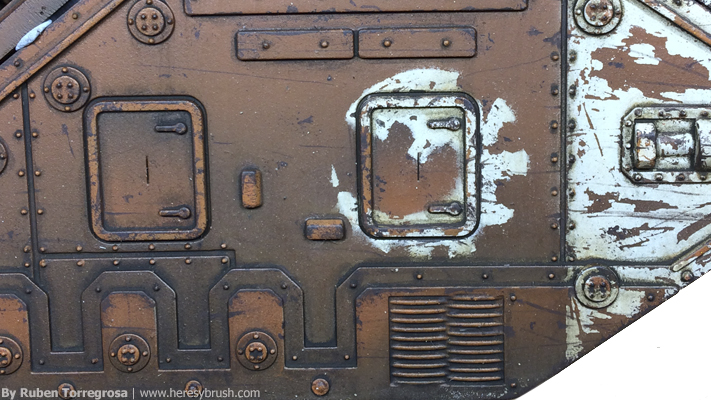 After applying some streaking effects as in here, the dust effect were done in four phases. (1) First, I thinned the enamel Natural efffect Light Dust A.MIG-1401 with White Spirit (1:1) and aribrush it on the sides of the tank. Mostly on the lower parts. After waiting for 10 minutes, I used a flat brush moistened with White Spirit to remove most of the enamel. I moved the brush vertically and always from the top to the bottom to accumulate more dust in the lower parts. I did something similar here. (2) I dissolved several pigments from AMMO with White Spirit and create a “wash” that I appied on the horizontal surfaces. After waiting couple of hours, I eliminated the excess of pigment with a cotton swap like here. (3) Using the same pigments, I created some splashes effect as described here. And (4), I added some oil or grease effects using the corresponding enamel from AMMO. I use different dilutions (with more or less White Spirit) to create effects of different intensities. 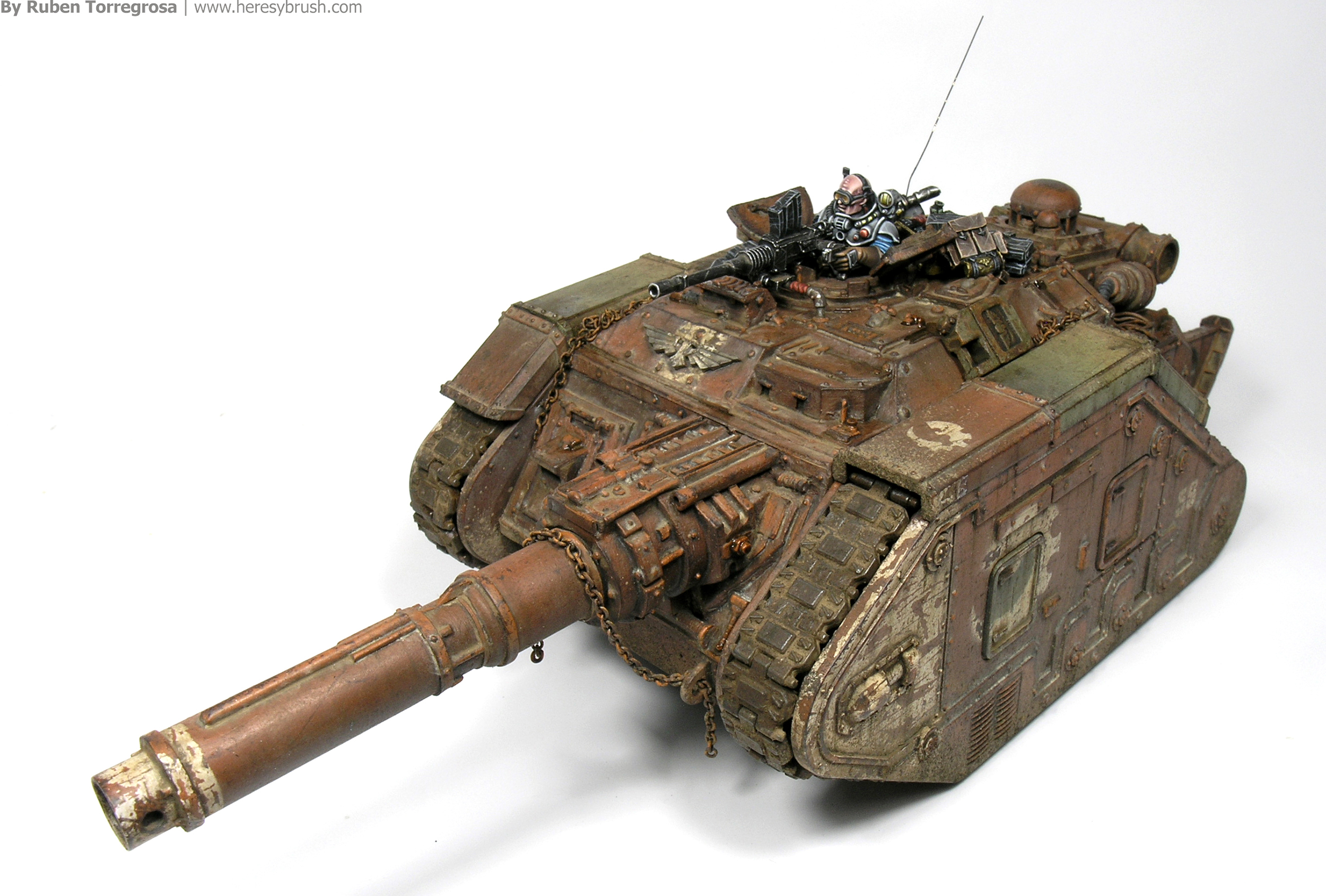 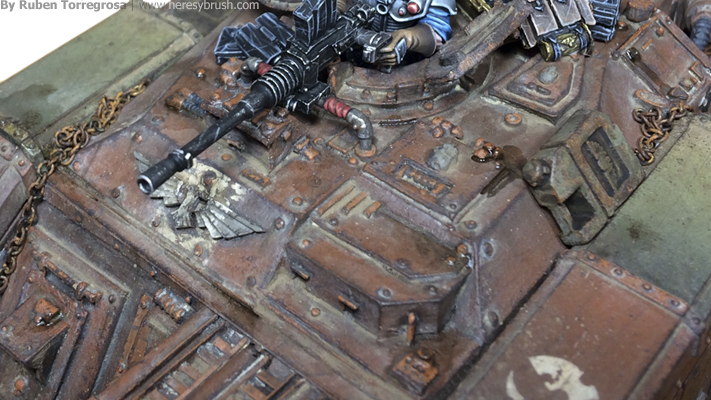 I painted separately different accesories and details, and then glued them on the tank. Note that it is important to apply similar weathering effects on these, specially the dust effects. However we can play around with these accesories, since some of them might be “new” and therefore do not be that weathered. The tracks were painted as in the previous Leman Russ. 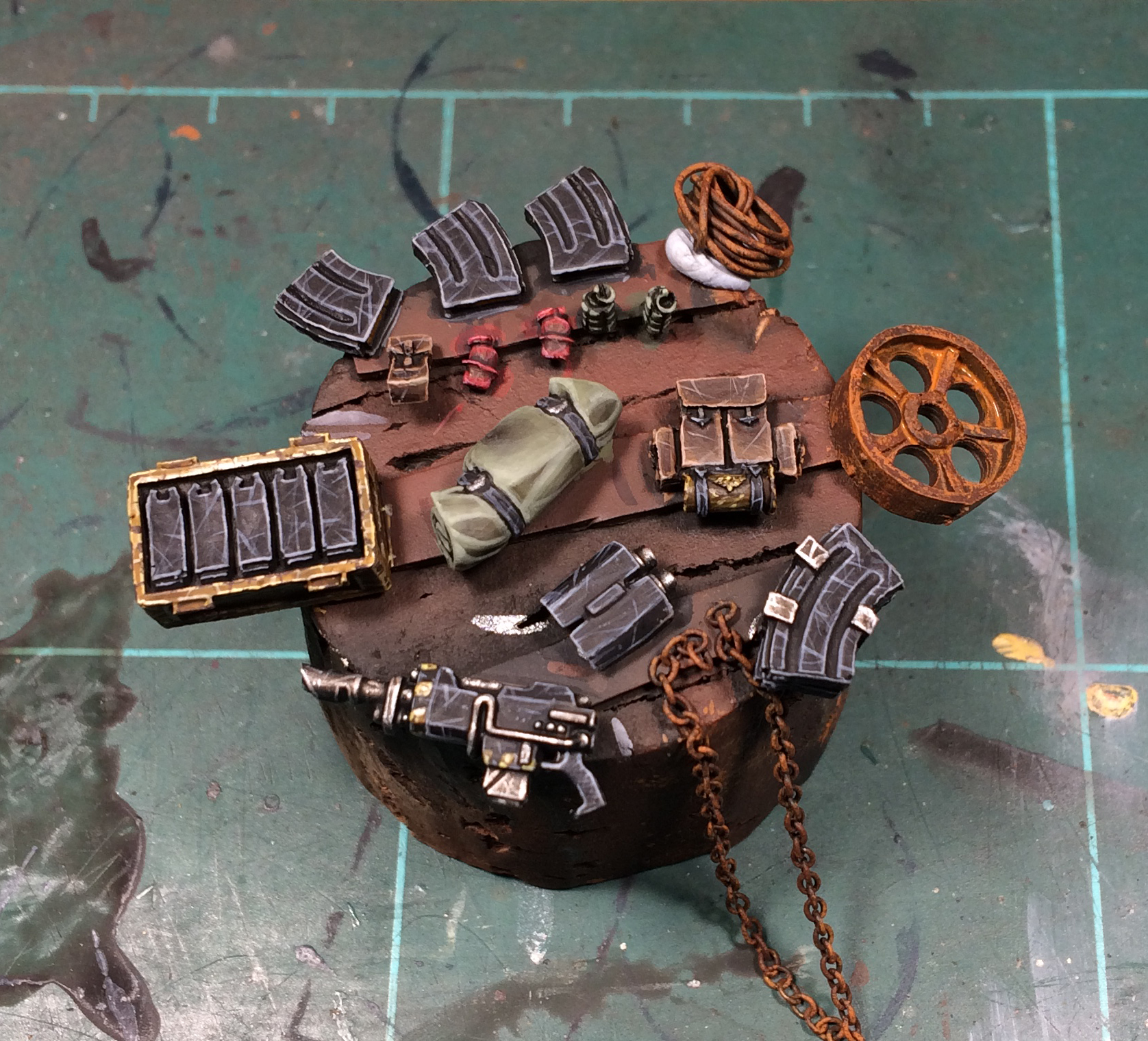 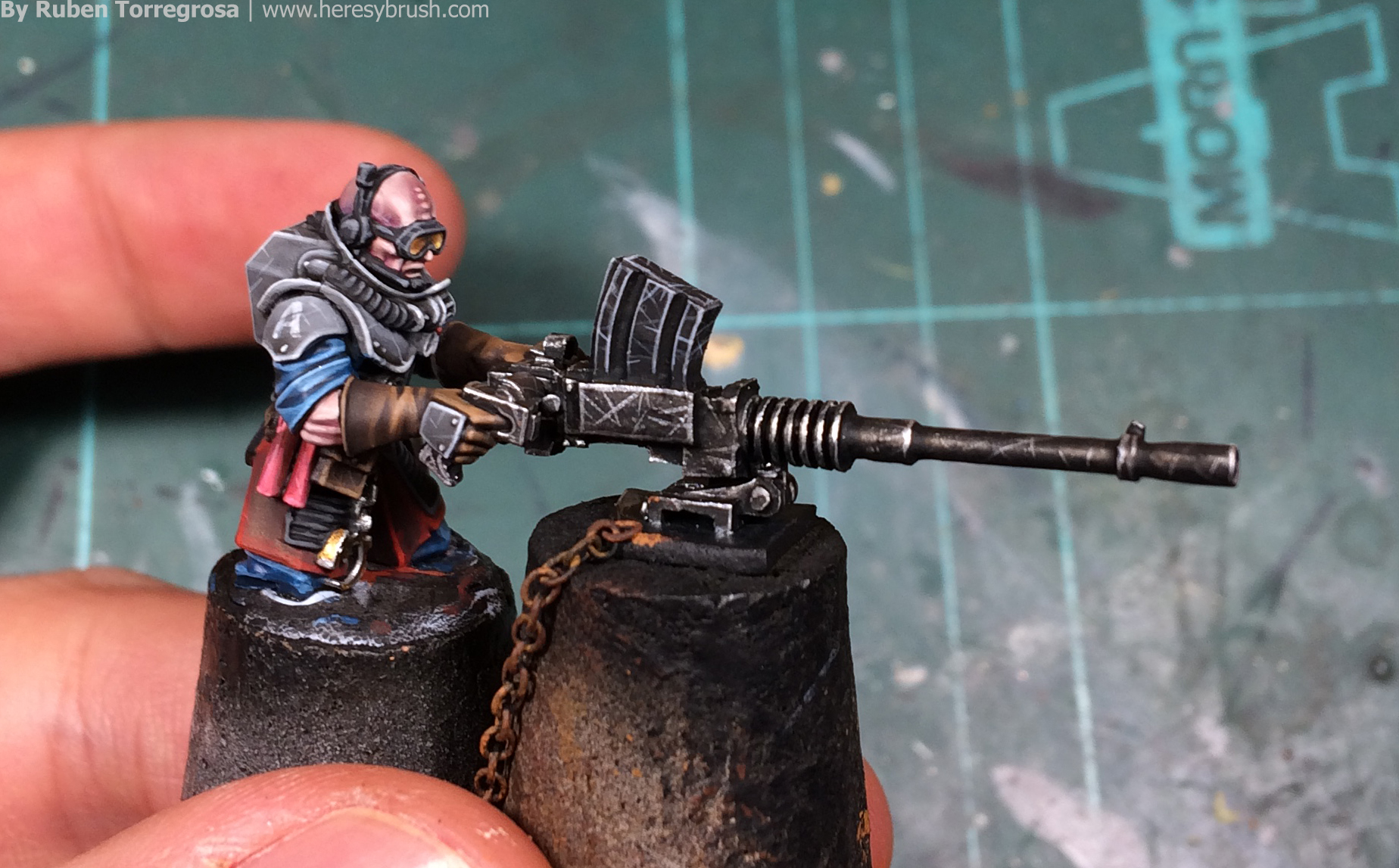 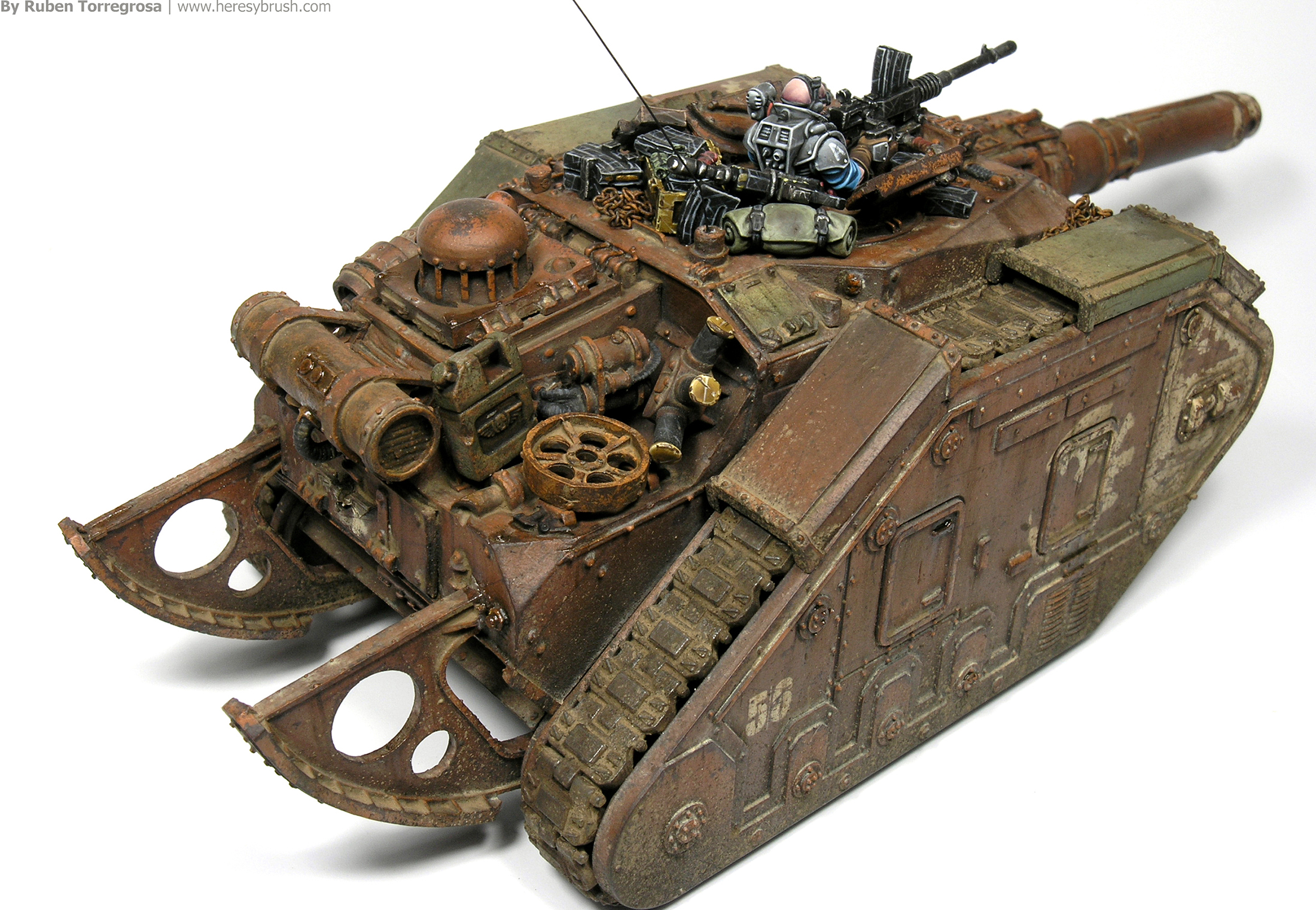 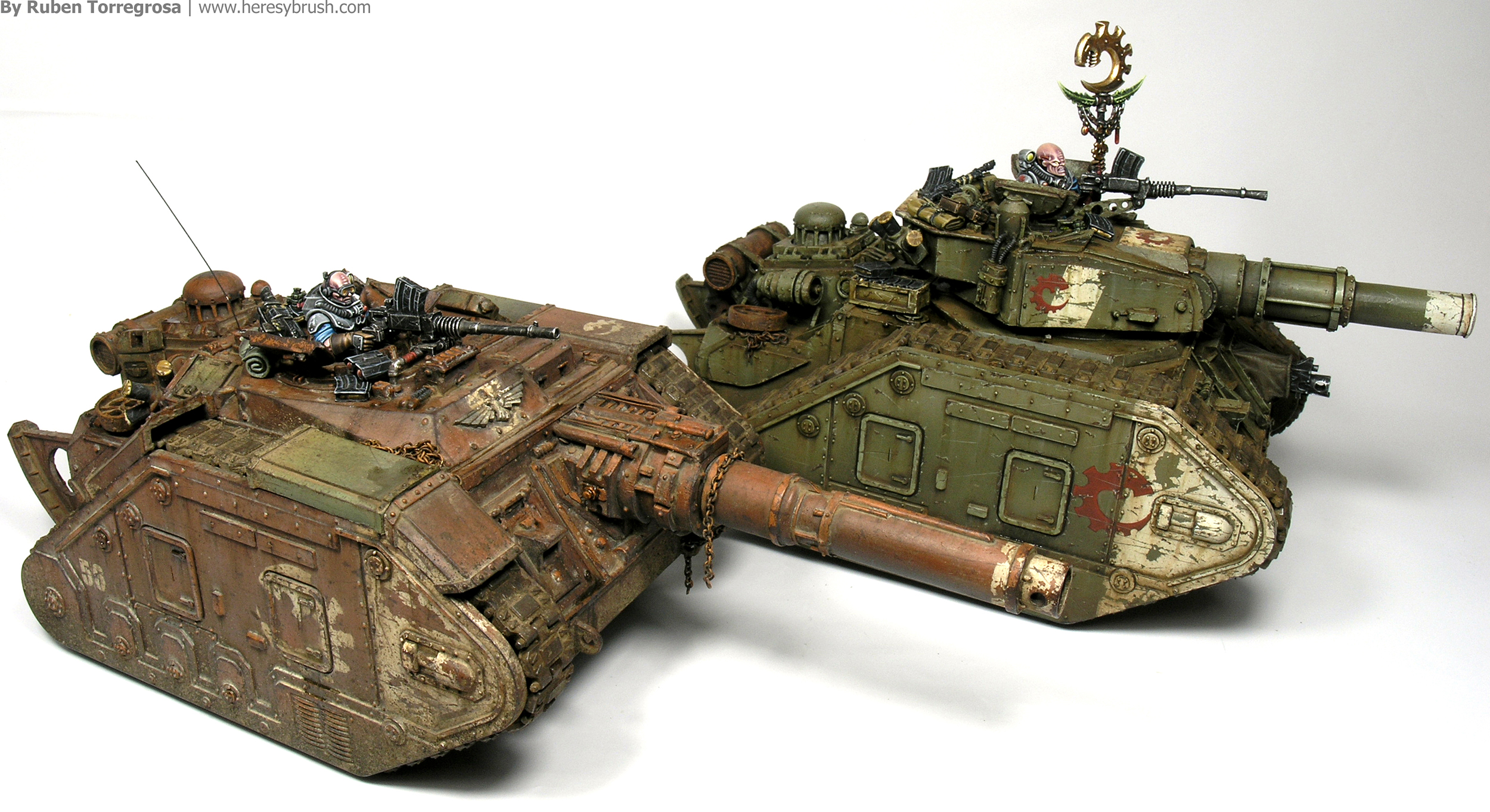 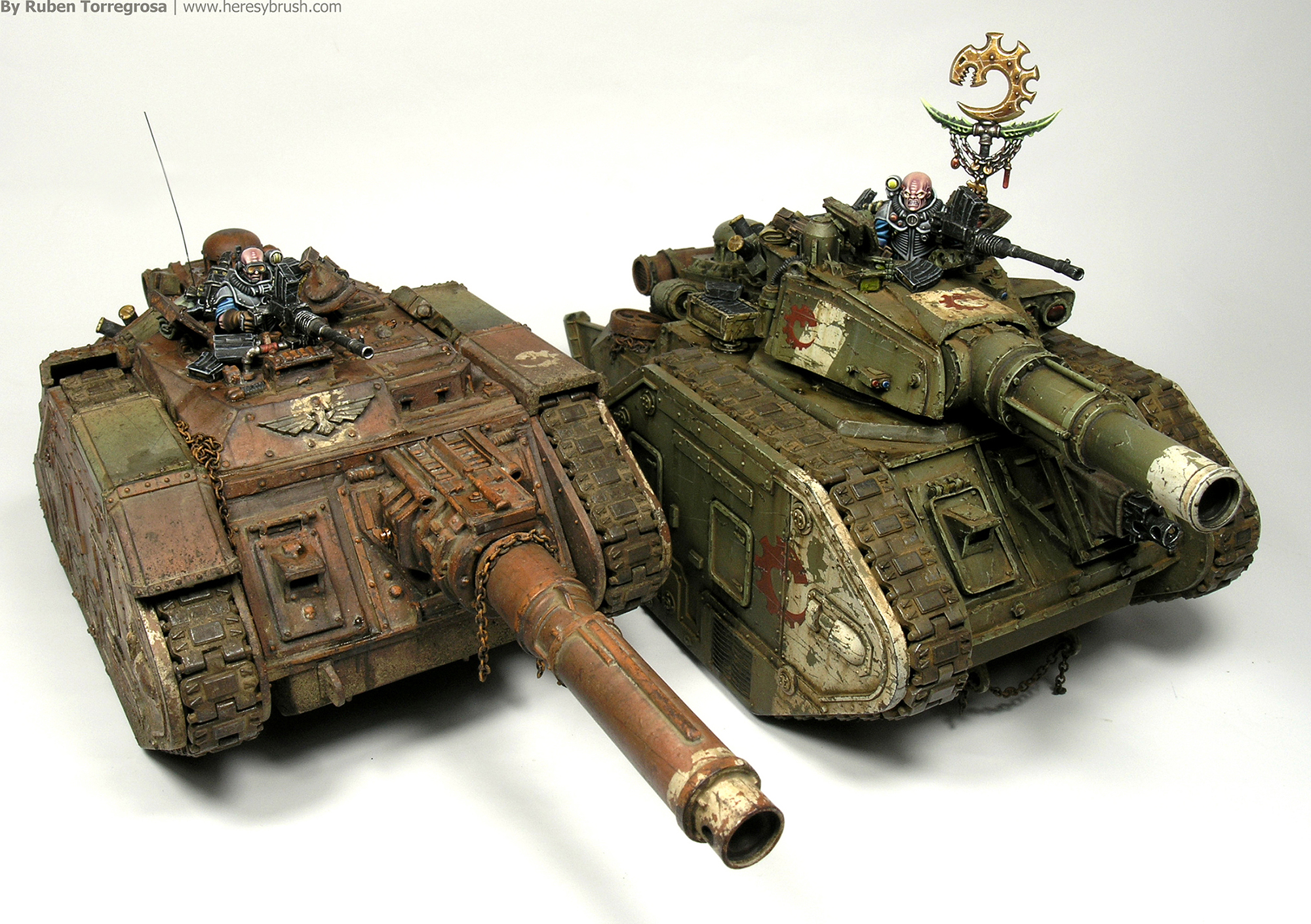 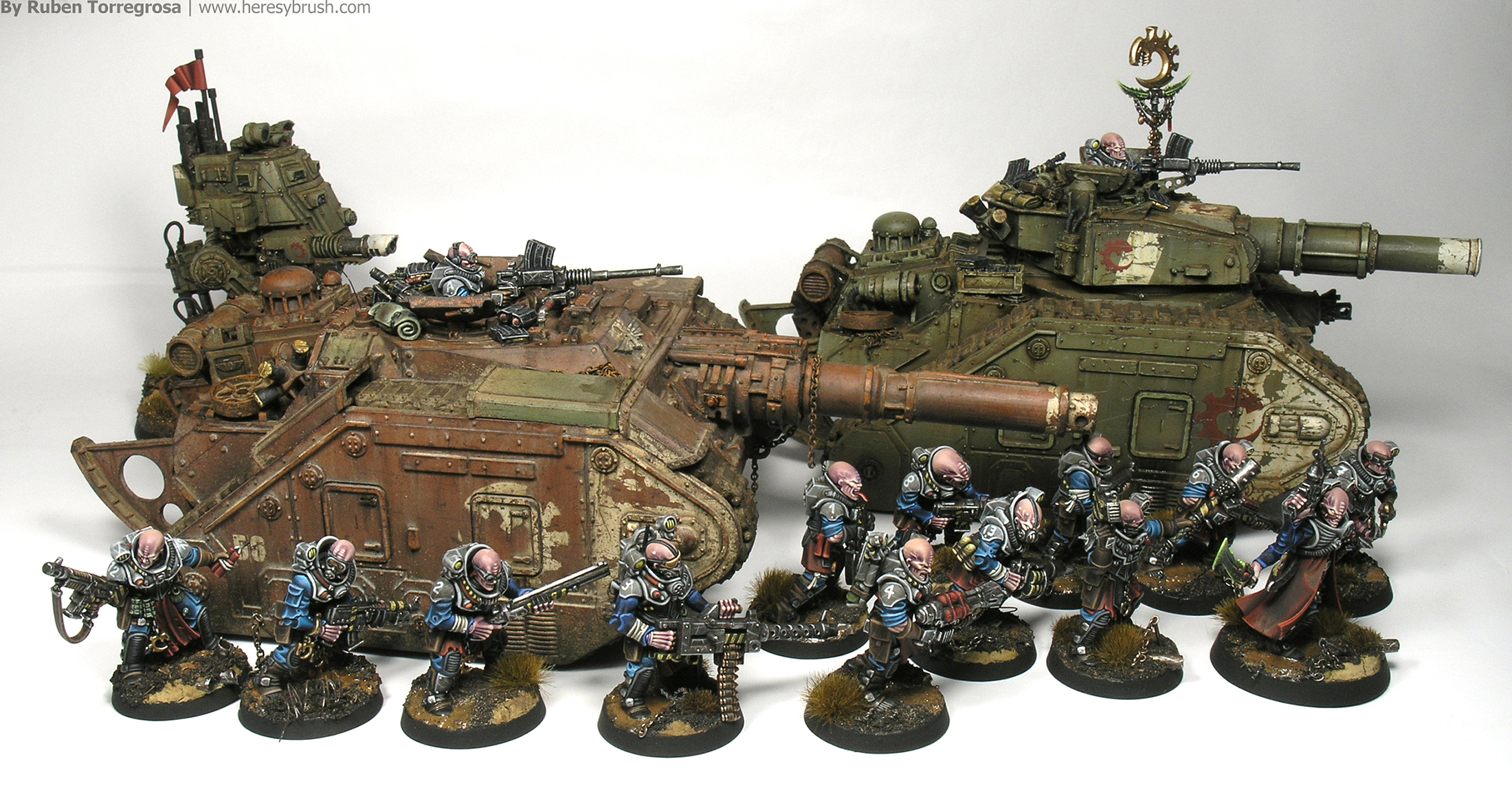