How to store our figures with Feldherr 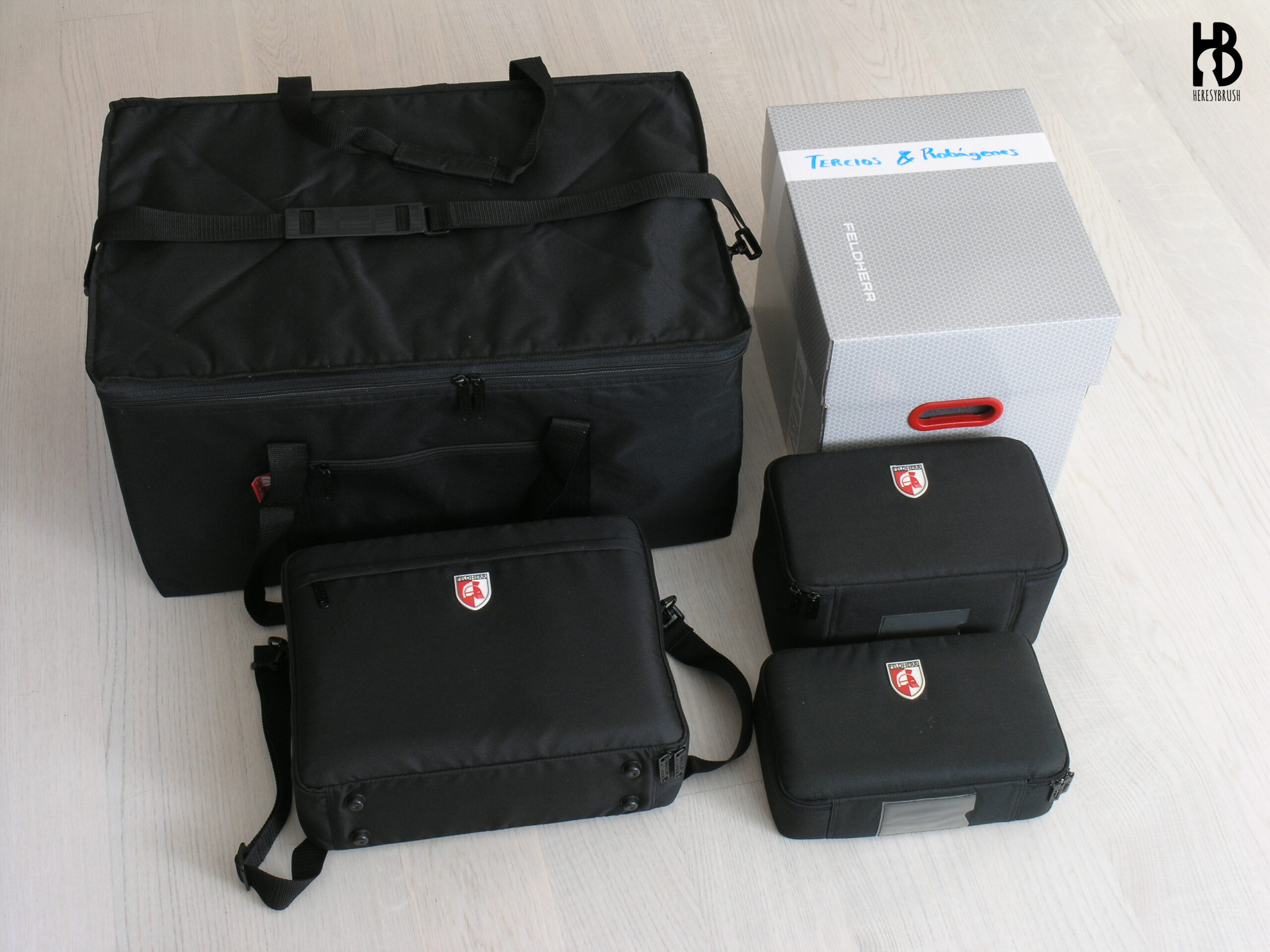 This post is a little bit different compared with what I normally discuss in the blog, but still it covers a very important part of our hobby: how to transport our painted figures safely and comfortably (for us and for them). Yes, I do not only paint, but I also play! (not as much as I would like, I have to say).

I use to keep my miniatures in a showcase with glass doors at home, where they are protected from the dust and I can easily have a look at them if I wish (strangely, I find it very pleasant). However, when I have a game in the local store or the club, I need to put them in a box and hope that the fragile parts will not break. This is not a big deal for skirmishes games such as Mordheim, because I only need to transport a bunch of miniatures. However, this might be a nightmare when transporting a big army, such as my Legions of Nagash for Age of Sigmar with 90 models including very large monsters such as a zombie dragon. Since I do rely on public transport to move around, I need to pack the models methodically to avoid ending up with tons of boxes in my back.

So far, I managed to transport any of my armies using three Feldherr small bags and couple of cardboard boxes full of foam for the biggest models. However, this was not optimal as my zombie dragon and Arkhan the Black already got broken a few times. Given that I am moving into a new flat soon, where I will not have spare space for the miniature showcase, I decided to finally buy a proper transportation and store system for all my miniatures. Although there are several companies offering figure cases, Feldherr was my first option because I have already used it before, and I was satisfied with it. Thus, I bought a big transport bag for my Age of Sigmar figures, a store carboard box for my Genestealer Cult army for Warhammer 40k and 15mm Spanish Tercios and a mid-size bag for my Flames of War models. For the skirmish games such as Mordheim or Bloodbowl I planned to use my old small Fledherr bags.

I visited Felhderr website to see if I could use some of their pre-assembled packs. However, none of them was optimal for my needs. Luckily, the Feldherr modular system is perfect to pick whatever you need and arrange your own customized bag or box. But for this first I needed to check properly how many and how big figures I have, including the “future” additions. The biggest concern was my Legions of Nagash army. Not only because of the size (90 painted models + another 60 models waiting to be assembled and painted), but also because of the large size of some creatures: the zombie dragon, Arkhan the Black and a Mortis Engine. Interestingly, I was very happy to see that Felhderr already thought about these bulky models and have some ad-hoc foams for each of them. No more broken wings in my zombie dragon, hurrah! 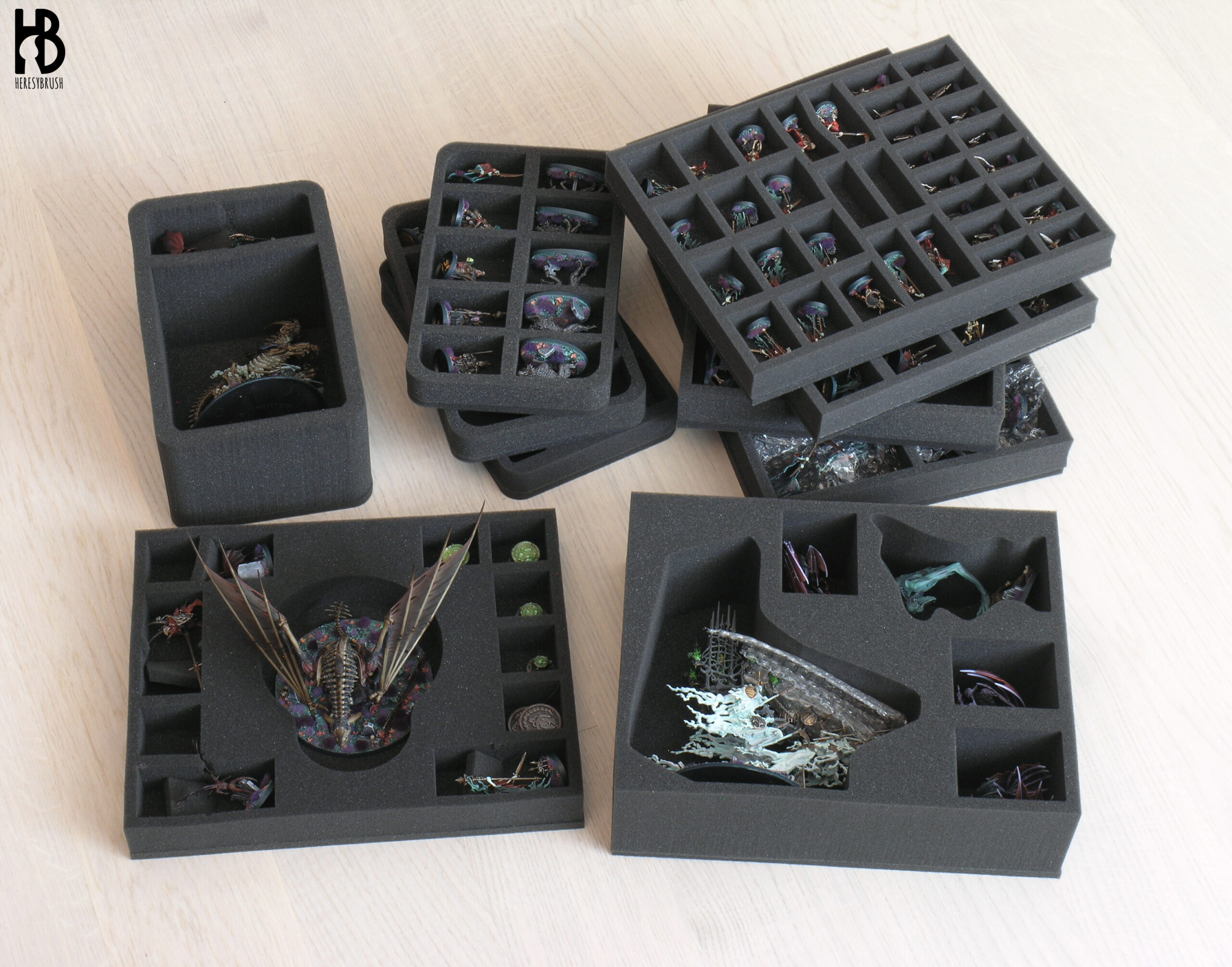 Although Fledherr has a customized order tool in their website, I did not find it very useful. Instead, I used an excel sheet to plan the big transportation bag for my Age of Sigmar army level by level. I picked one of the biggest transportation bundles (56 cm long, 36 cm wide and 31 cm high) that would allow me to play with 7 levels of foams. Furthermore, the bag has several carrying straps, either for the hands or the shoulder, to facilitate the transportation. This would nicely fulfill my main aim: use a single bag to store and transport my whole collection.

First, I selected the foams meant for the biggest models: zombie dragon and the Mortis Engine. As I said, luckily Feldher already had something specific for these. They are huge models, and accordingly the size of their foams is also enormous. Basically, half of the box is already gone with these two. But I still have dozens of models to store! At least, these big foams have some extra holes for additional models. For example, I used the Mortis Engine foam to store three Vargheists and the Forge World model, the Mourngul.

Next, I focus on the Arkhan foam, another huge model.  At least, this foam is not that big although high (it takes 3 out of 7 levels). That gave me space for three levels of small foams, which I found perfect for infantry models. Some of my miniatures are bulky, so I selected two foams for big infantry models and one for small ones. That is, 36 holes in total. Well, 70 holes more to go plus the cavalry!

The next choice was easy: I had 4 levels left for big size foams. I picked two foams for infantry (72 holes in total) and two for cavalry (16 in total). Both types of foams are specifically designed for the Legions of Nagash army. The cavalry holes are super big, so I decided to put two models separated by a layer of bubble wrap. Finally, I picked coupled of 10mm topper. I had a small gap of around couple of centimeters on top of the Mortis Engine foam. This is perfect for the battle tome book!

I am honestly quite happy with the outcome. I managed to store the full army and still have plenty of space for the upcoming reinforcements. More importantly, I do not need to move half a dozen of bags anymore when having a game. It is true that the bag is quite big, but all models are plastic and therefore the whole set is light. Indeed, I found either handler very comfortable; and I can still carry a backpack if needed. In terms of money, it became pricy (around 150 euros). Some people might think that this is crazy, but that amount of money is not even 1/4 of the money I paid for the (unpainted) miniatures. Sometimes we do not really think how much money we spend in plastic and paints. I think that is a small investment compared with how useful and handy it is going to be in the long term. After spending way more money on the figures and paints, and dozens of hours on the painting table, I am very happy to have them properly stored. 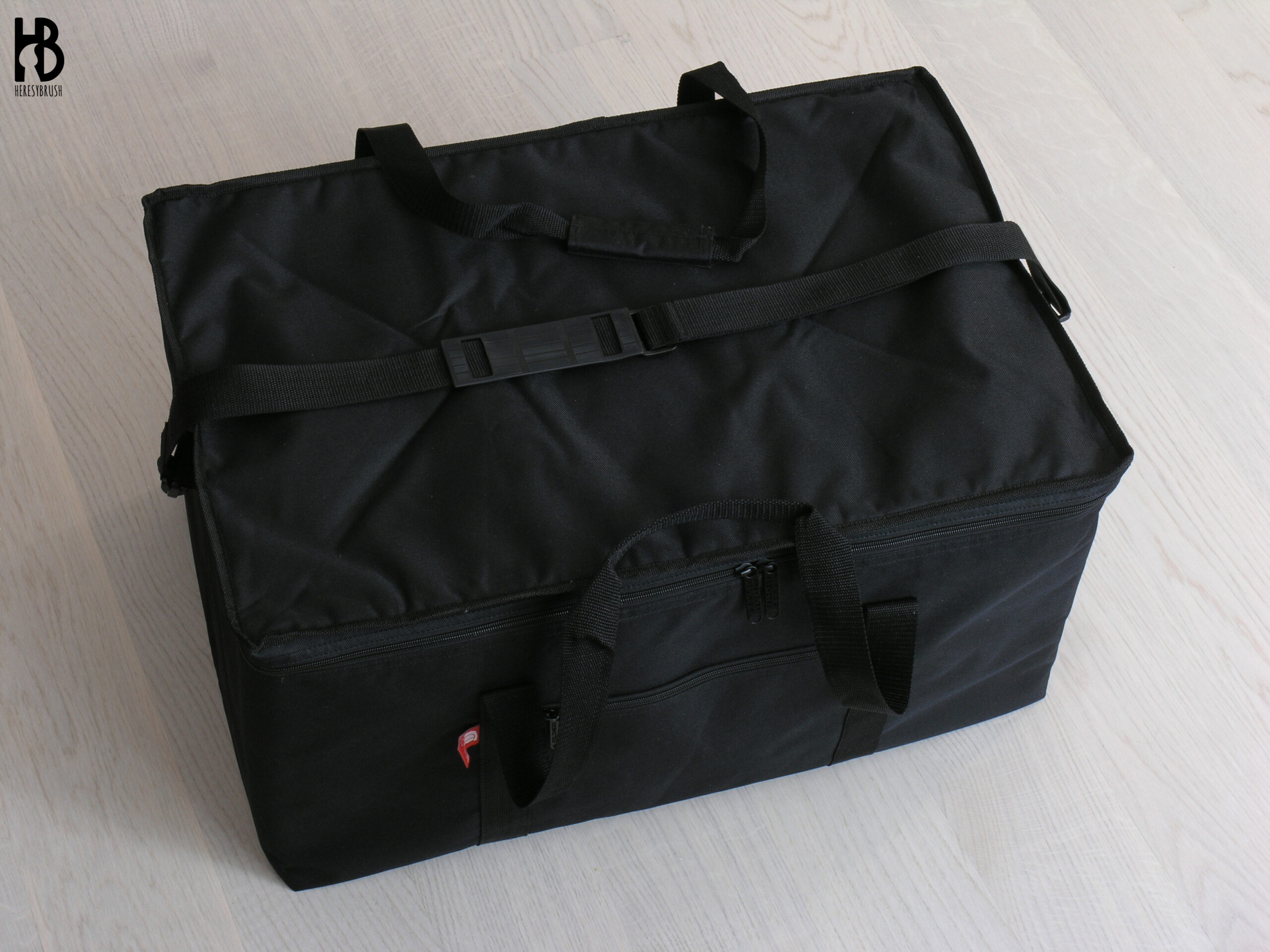 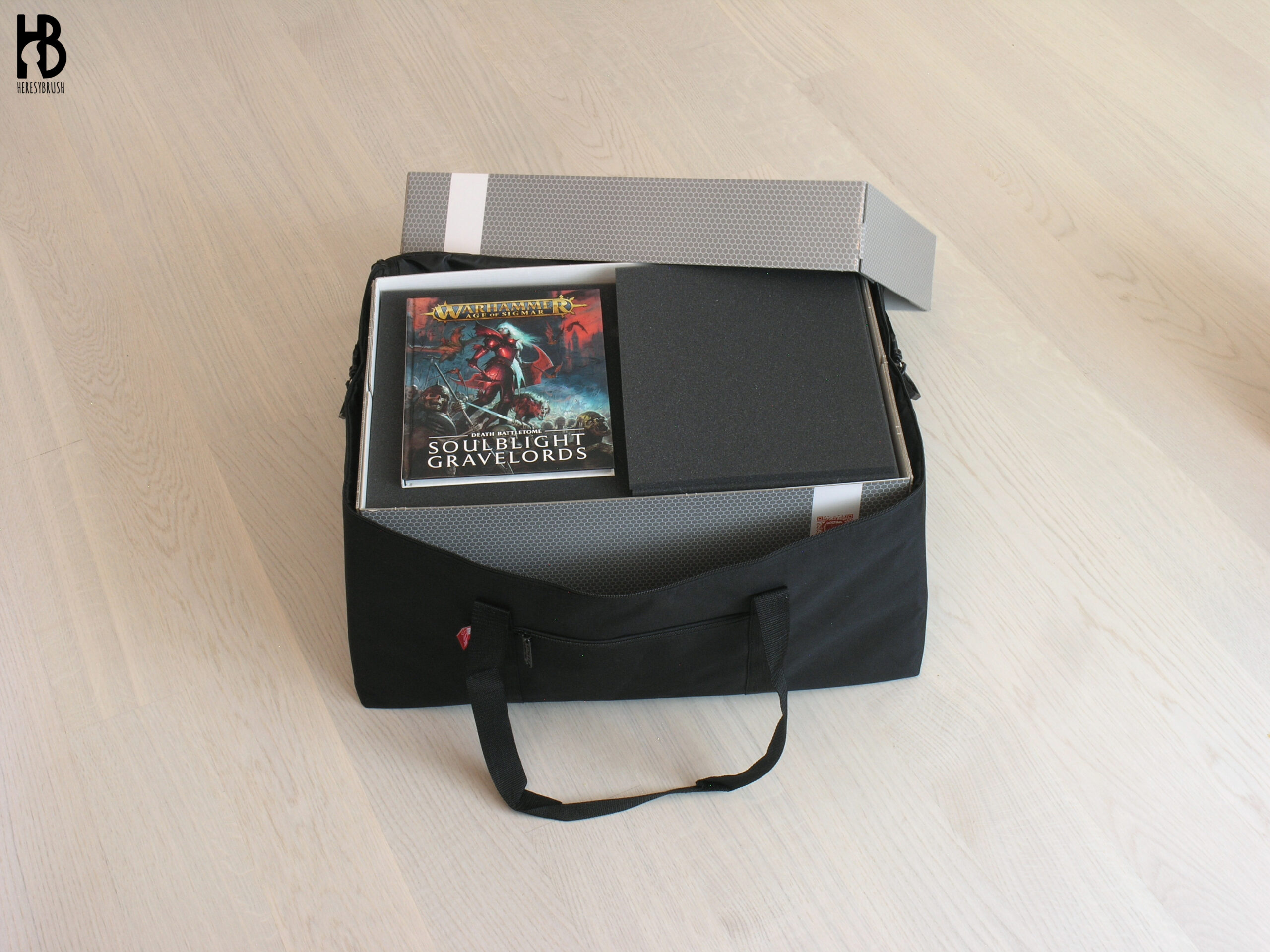 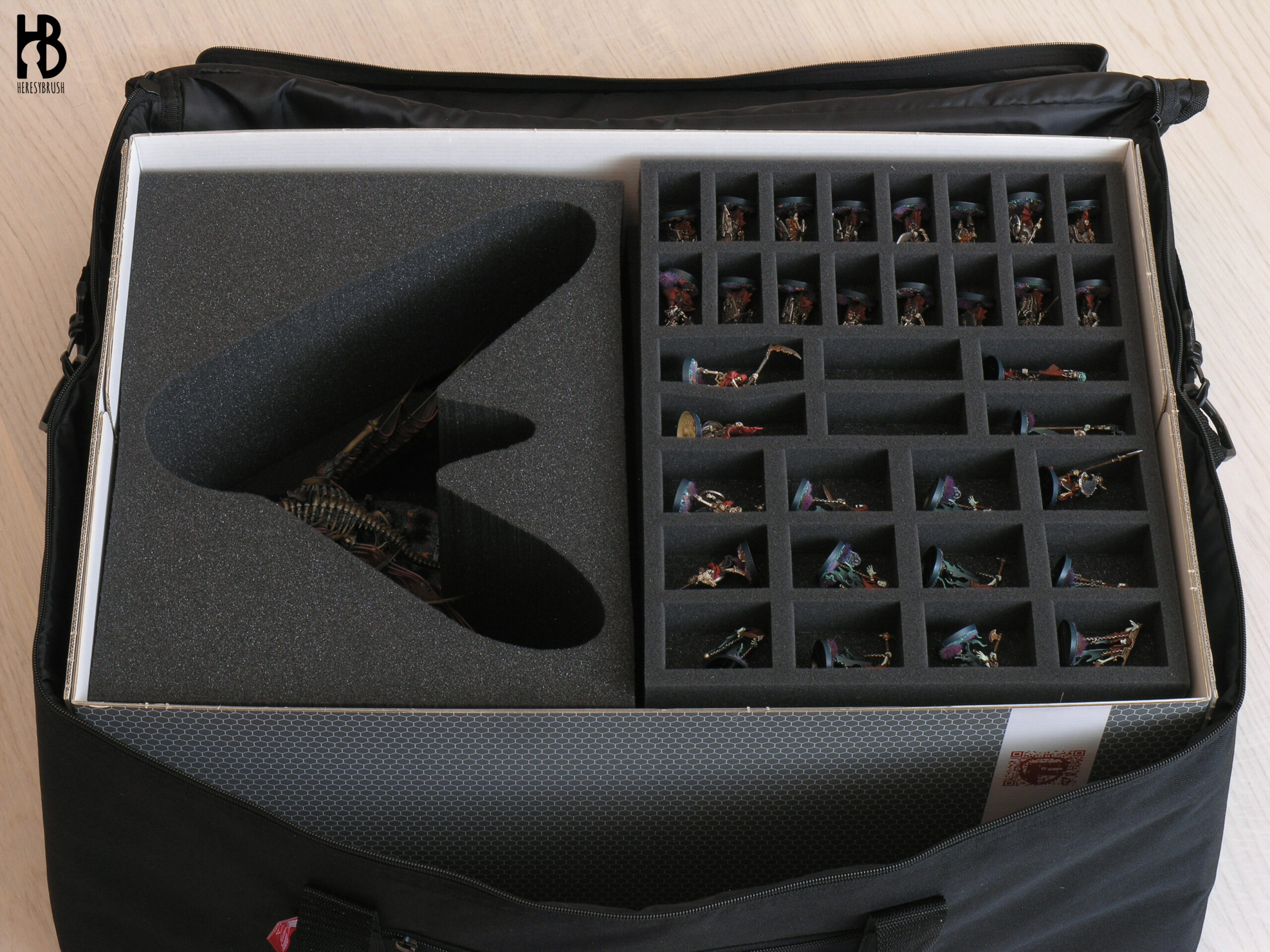 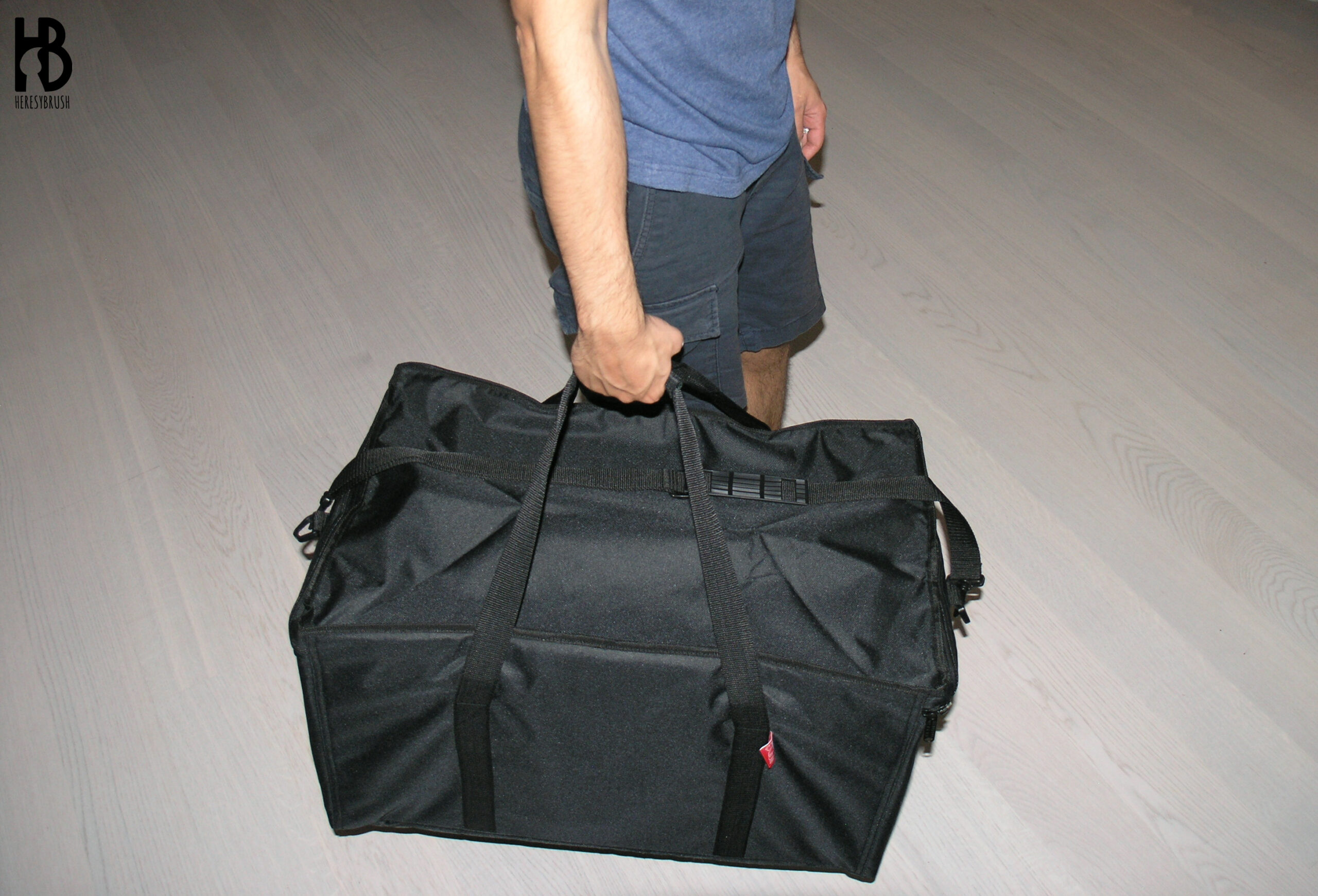 Although I do not play Warhammer 40k, for the last years I have been accumulating a lot of miniatures for a future Genestealer Cult army. I even painted two Leman Russ tanks (this and this) and a bunch of cultists (here). I have assembled another 40 models, and much more is about to come. Since I already got a big transportation bag (56cm wide) for my Legions of Nagash army, for the Genestealers I decided to buy a normal store cardboard box that is half wide (27,5 cm). My idea is to buy a second box like this in the future when I expand my army and thus fill the big transportation bag. Therefore, I could use the same big bag to transport either a big box with all my Legions of Nagash figures or two boxes full of Genestaeler cultists. 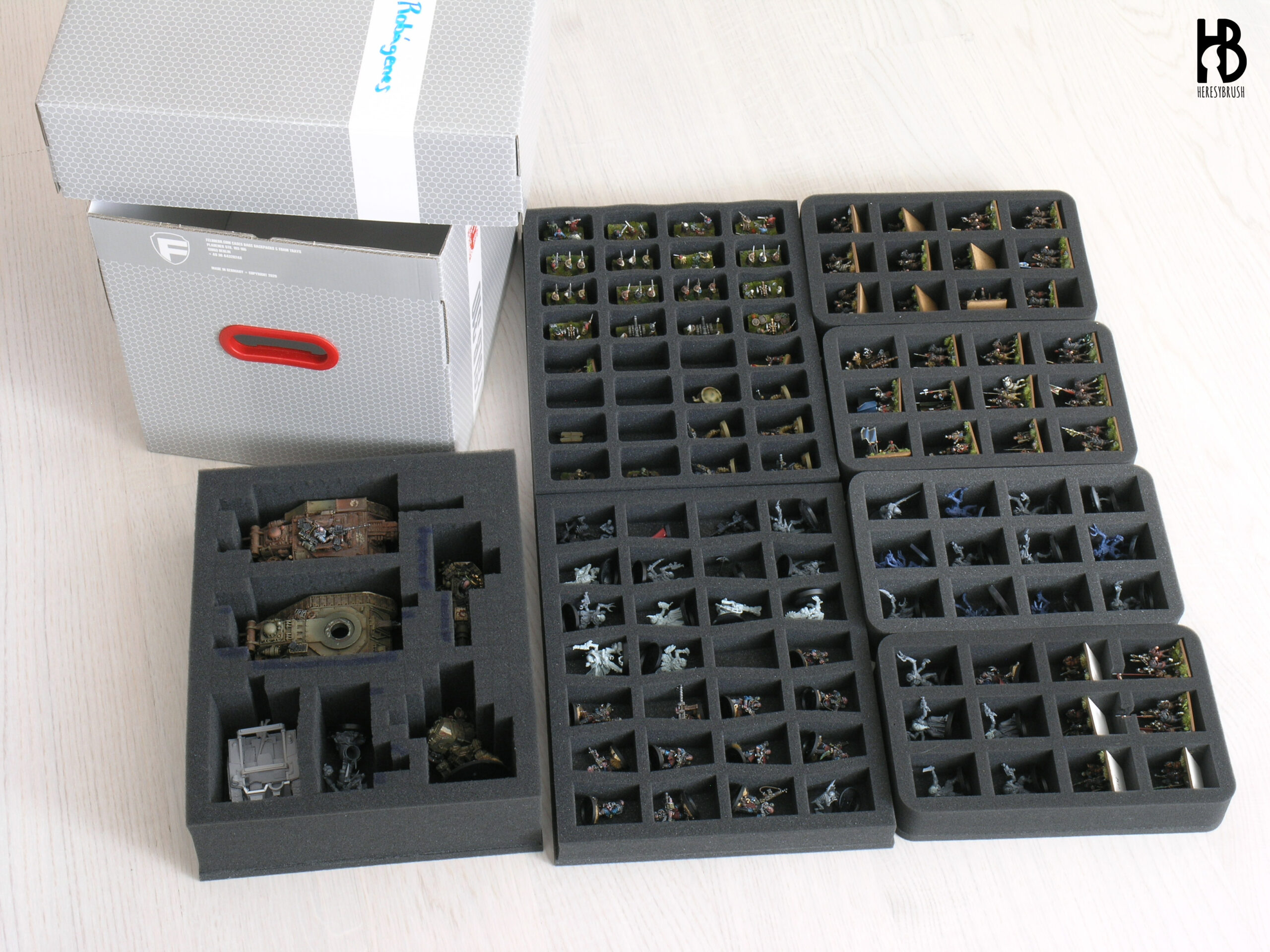 I planned this box with 5 levels of foams. The biggest issue in this case were the two Leman Russ tanks and the Sentinel. They have unconventional shapes, specially the tank hunter Destroyer. Therefore, at the end I selected a “pick and pluck foam” where the foam can be easily separated by hand to fit it around my tanks (it reminds me the photography cases). Furthermore, this foam is 8cm high, which should be enough for the turreted tank and other massive models such as the Patriarch. I should probably buy a second foam like this in the future as I am planning to expand my tank company with a few more armored transports and soft skins.

With almost 1/3 of the box already gone, I needed something for the infantry. Another problem of this army, along with the large number of models, is that some miniatures are huge, such as the hybrids (I will have 50 of these), genestealers with 4 arms and the aberrants. In this case I went for some specific foams designed by Feldherr precisely for this army. They have 12 holes and I could fit four of them in two columns. This makes a total of 48 big holes. I still have space for another two fill size foams, and I picked one with 28 holes and another with 32 holes. These would serve to store smaller models as well as my Spanish Tercios. Unfortunately, I had 3 cm left that are a little bit useless since I could not fit any interesting foam. I will use the remaining space to store the army book, dice and objective markers.

The price of this box was around 60 euros, the same as a medium size transportation bag (see below). We might think that it is a little bit expensive considering that it only serves as a storage system. But it also serves as a transport box. For example, I am planning to use it to transport my models later after buying a twin box. In any case, once more, I am especially happy to nicely store all my models, specially the tanks.

Transportation bag for Flames of War 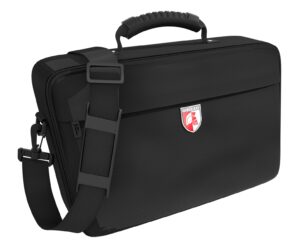 This one was easy and did not require much thinking, since when I was living in Spain I used to have two of these mid-size Feldherr bags to transport my FoW armies. I think that the size of this bag (very similar to the classic Game-Workshop hard cover case) is simple perfect: big enough to transport a lot of models but still easy to handle and store at home.

I planned this bag in three levels of foams. Although Feldherr offers several options specific for FoW figures, I decided to pick two big foams with 32 holes that would work nicely either with tanks or infantry bases. To fit big tanks, I only need to remove the separating foam between two holes. Furthermore, I added another two small foams for the artillery bases and another one for tanks. I finish it with a topper to protect the upper part.

I found the price/performance of this case the best. For around 55 euros I had plenty of space to store all my Flames of War models, and I can use it to comfortably transport a full army and accessories when having a game. The bag has a carrying handle on the top and a shoulder strap, which makes its transportation very easy. Furthermore, it includes a small pocket with a zipper to store some documents or even a thin book. 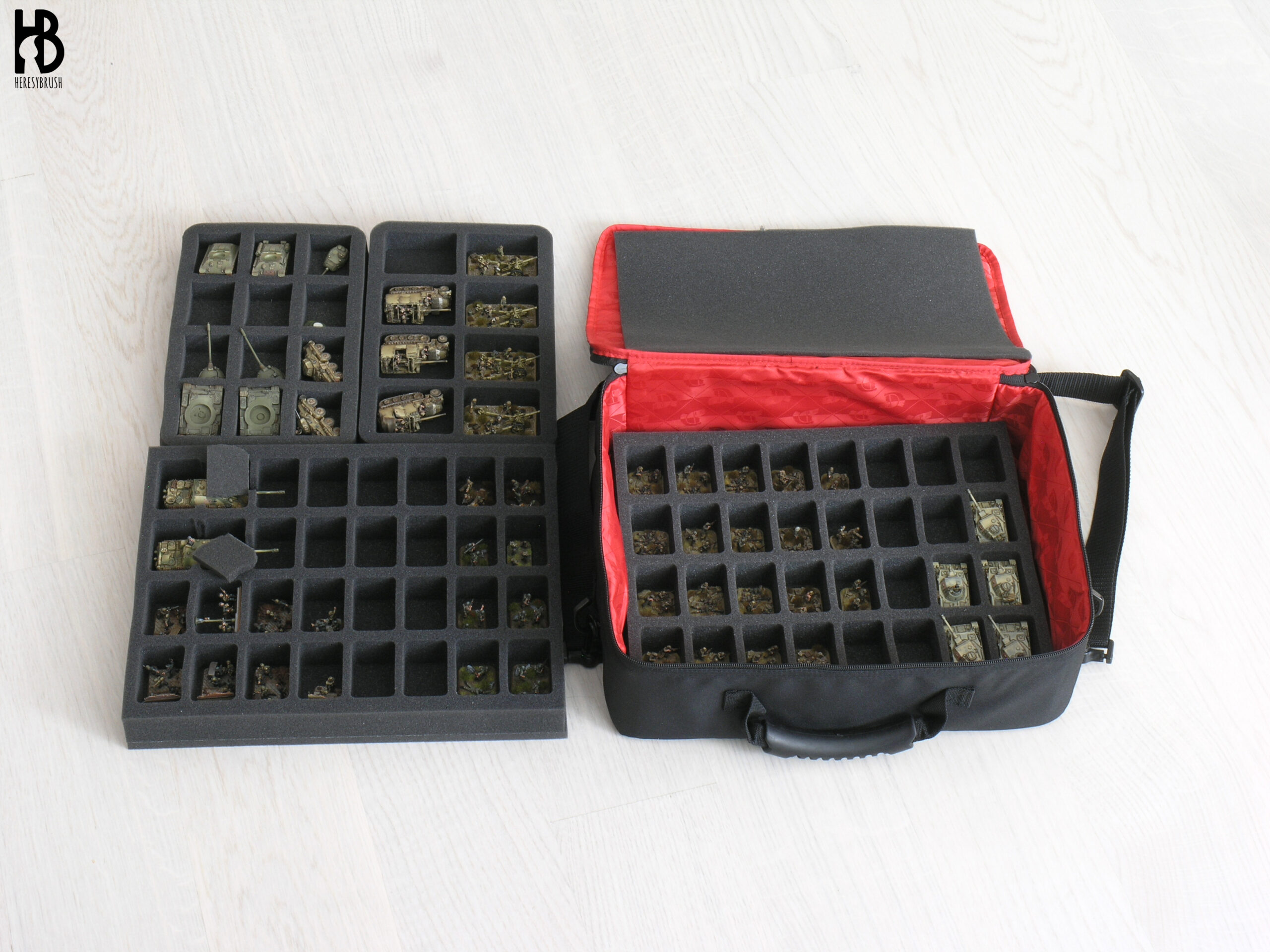 Finally, if you are interested in purchasing some of these, Feldherr gave me this discount coupon to use in their website. The discount is 5 Euro for a minimum order value of 50 Euro. It is due until 31.01.22.

4 thoughts on “How to store our figures with Feldherr”