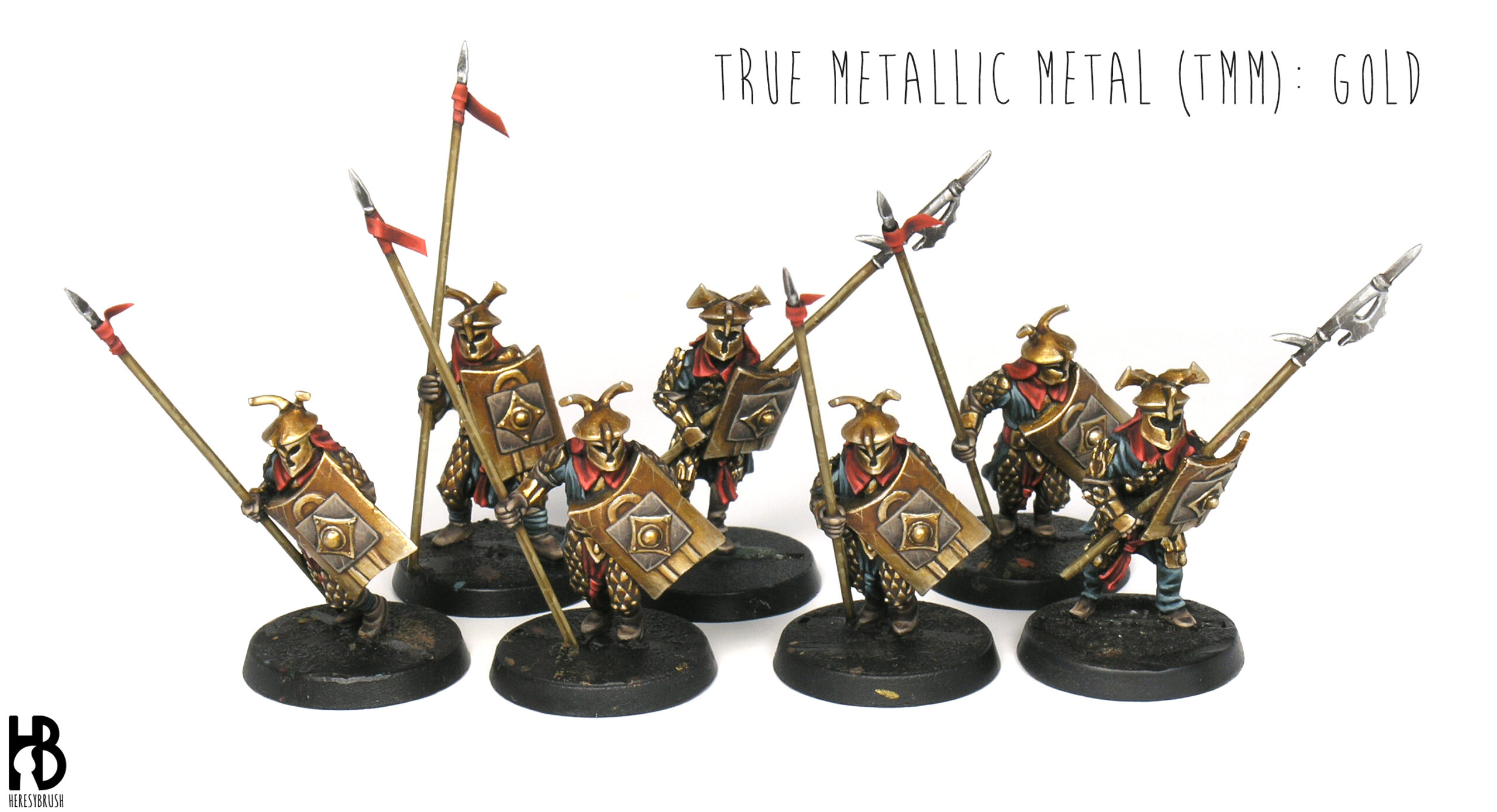 I previously wrote a short tutorial describing how to paint TMM steel (you can read it here). And it was about time to write a similar post about how to paint TMM gold, taking advantage of a bunch of Easterling warriors (Games-Workshop, 28mm) I am painting right now. I am also expanding the tutorial to explain how to paint the red and marine blue clothes. The bases are unfinished, but I am planning to prepare another tutorial explaining this part.

I would like to clarify that this is my own interpretation of this technique, meaning that is not the only way to do TMM gold; and definitely it is not the best since I create the shadows and highlights in places where perhaps they should not be. But I like the results. Somehow, I follow a painting technique applied in scale models and called “color modulation“. This is based on creating very striking -but unreal- contrasts between shadows and lights in adjacent panels of the vehicle.

Furthermore, for these warriors I followed something explained by Iván Sainz de Castro‘s in his masterclass in the book How to Paint Miniatures for Wargames. He combined fast painting approaches with other more elaborated to speed up the painting process while obtaining an overall high quality paint job. He applied the most time consuming painting techniques only in the more important or symbolic parts of the miniature, using faster approaches on the rest. Following this idea, I spent more time painting the golden parts of these Easterlings (the dominant color and more representative), while using simpler methods for the clothes, leather and weapon.

We start applying the primer or undercoat. This does not only facilitate the subsequent application of the paint, but it also make it more durable (this is essential whether we are planing to play with them). I chose black because I can take advantage of this color later on, leaving it in the recesses. However, when painting gold it might be advisable to use grey or brown primer. These neutral colors are easily covered by gold paint.

Next, we base coat all the golden parts with Gold A.MIG-0198. We apply several layers of thin paint until getting an even gold color all around.

To quickly mark all the recesses and at the same time create old gold we apply a dark brown wash by mixing Dark Brown AMMO F-533 with Transparator A.MIG-2016 in the same proportion. The latter is an specific product to thin acrylic paints in semitransparent coats. If you are more familiarized with Citadel paints, this mix mimics the Agrax shade. We apply a generous layer of wash over all the golden parts. The aim of a wash is to accumulate the pigment in the recesses.

Next we apply dark brown glazes by adding a bit more of Transparator  to the previous mix. Compared with a wash, we use a bit of paint when applying a glaze. The glaze is not supposed to puddle the surface. After brushing off part of the paint on a paper or cloth, we apply the brush in a very specific direction: in this case, from the lightest part to the darker. This is important because we leave more paint in the point where we separate the brush from the surface, meaning that that point will be darker.

We apply glazes to strengthen the shadows in certain parts to enhance the contrast, such as the joints and lower parts of each piece of the armor. We also use them to create completely new shadows or invert those created by gravity after applying the wash. For example, I plan to invert the shadows in the shield, placing them in the upper part and the highlights at the bottom.

Now it is time to outline every single part of the armor and shield. This is a time consuming task, and quite challenging in some parts (e.g. the scales of the armor). But it is essential to create more contrast and for the TMM to work. We prepare a mix of Dark Brown AMMO F-533 and black in the same proportion, and using a sable brush we carefully paint a thin line between each element (and scale; although in this case we can paint perpendicular lines from one edge to the other of the armor plate rather paint each triangle individually).

We recover the base coat, Gold A.MIG-0198. Using a thin brush we edge-highlight every single part of the armor, helmet and shield. For the scales this means the two upper sides of the triangles. For the helmet and shield, each single edge. Again, this is an exhausting but essential step for the TMM. Dark outlining and edge-highlights are a must.

Furthermore, we apply glazes (see Step 4) with Gold in the larger surfaces, such as the shield and the helmet. Note that in the shield we apply the glazes in the opposite direction compared to the Step 4: we want to place the highlights in the lower part, and therefore, the brushstroke starts in the upper part and ends at the bottom. In the helmet we focus on the sides and “antennas”. We can also start adding some scratches in the darker part of the shield.

We repeat the previous step but using a lighter color. To highlight Gold I usually mix it initially with 30% of Silver A.MIG-0195. We again apply edge-highlights and glazes in the same areas, but reducing the painted areas. For instance, for the scales we paint only the very upper part of each peak; whereas for the shield we apply new glazes toward the lower part, but starting the brush stroke from a lower point than before.

Sometimes when using silver to highlight gold we might end up with a very light or even whitish tone of gold. This does not look like the old gold we were looking for. To fix this problem we can apply a general glaze with only 10% Dark Brown AMMO F-533 and 90% of Transparator A.MIG-2016 all over the miniature. The semi-transparent layer of Dark Brown will “stain” the lightest spots of silver, recovering the warm gold color.

To paint the clothes I followed the triad system (shadow > base > highlight) with an additional highlight. In other words, I apply three consecutive highlights over an initial dark base coat. To speed up the painting process I did not use glazes to blend the different layers, but I still used thin paint to create smoother transitions.

To paint the red garments: we start creating the shadows by base coating the red clothes with an even layer of Pure Red AMMO F-527 and Bright Violet AMMO F-539 mixed in the same proportion. We increase the proportion of red to 75% to create the first highlight and apply it in the most exposed parts and wrinkles. The second highlight is done with pure red, and applied in the same spots as before but reducing the painted area. The final highlight is done by mixing Pure Red Pure Red AMMO F-527 with a bit of Sunny Skintone AMMO F-537 and Bright Orange AMMO F-538. We apply it only in the extreme of each highlighted area as a thin line or dot. When painting the highlights we can simply follow the details and wrinkles sculpted in the miniature, ignoring any source of light.

To paint the black or marine blue garments: we start by mixing Marine Blue AMMO F-518 and pure black in the same proportion, and then we base coat all the black garments. Next, we use directly Marine Blue to paint all the raised parts. To create the two following highlights we mix Marine Blue AMMO F-518 with increasing amounts of Light Sand AMMO F-511, first 15% and then 30%. Once more, we apply each layer of highlights in the most exposed parts that we previously painted, but always reducing the painted area.

To paint the leather parts -gloves, shoes, stripes and the square on the shield- you can follow this other tutorial. And similarly, for the blade of the spear you can follow this. Note that in the leather square of the shield we inverted the shadows and lights respect to the golden part (lights are in the upper part and shadows in the lower). Although unreal, this will create a lot of contrast.

To paint the spear we can start with a base coat of Matt Earth AMMO F-507, followed by a Dark Brown wash as we did before (Step 3). We apply the highlights by mixing Matt Earth color with white and painting parallel lines across the pole using the body of the brush rather than the tip (that is, using the brush “horizontally”). This will simulate the wooden veins. We can also add some scratches here and there by painting thin perpendicular or diagonal lines.

Many people asked me how I replaced the original halberds and swords with pikes. The metal pikes are from 1898 Miniatures (link here). They are 10cm long, with a flattened and sharp end resembling the pike blade. The replacement process was simple: 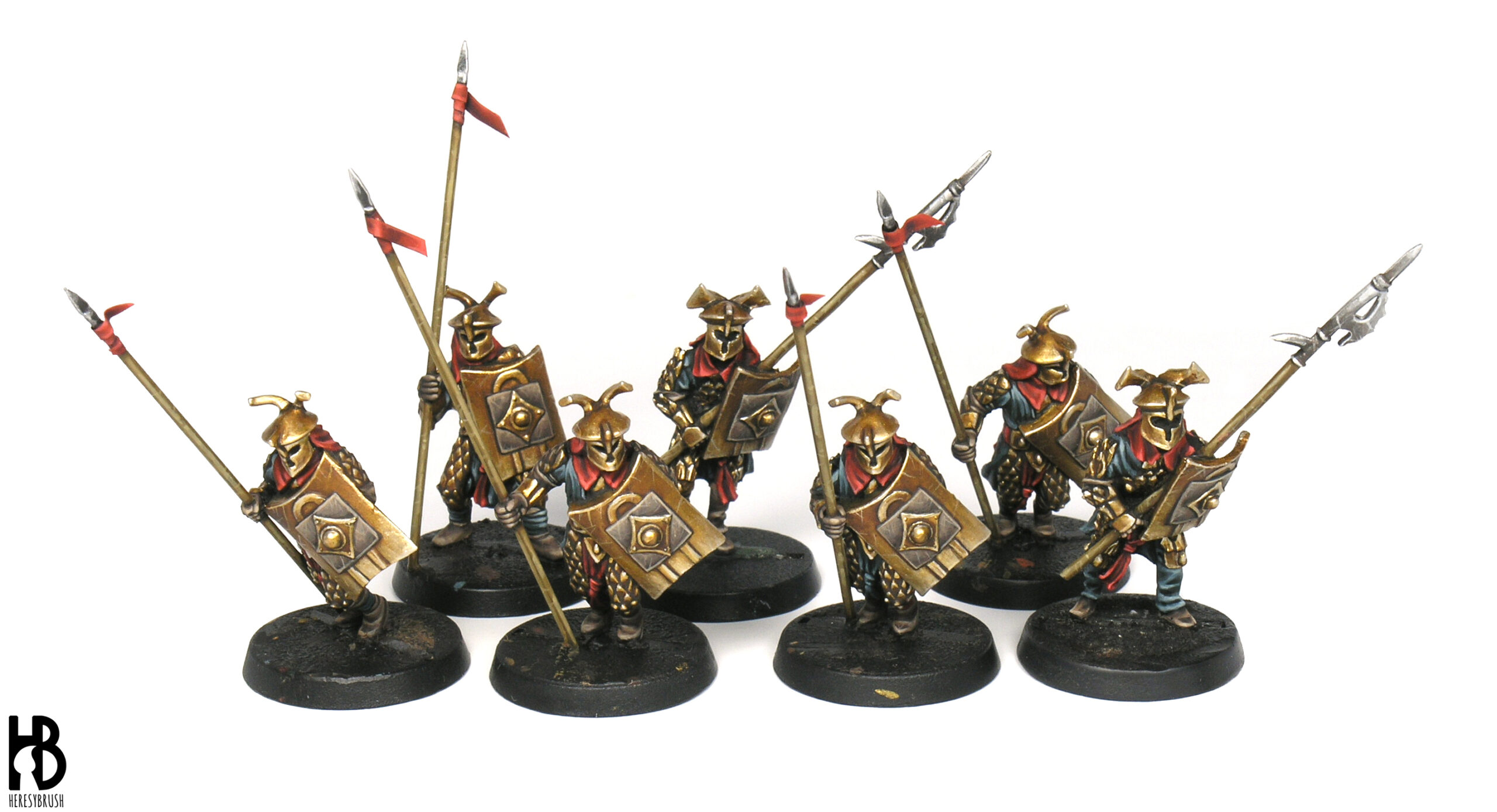 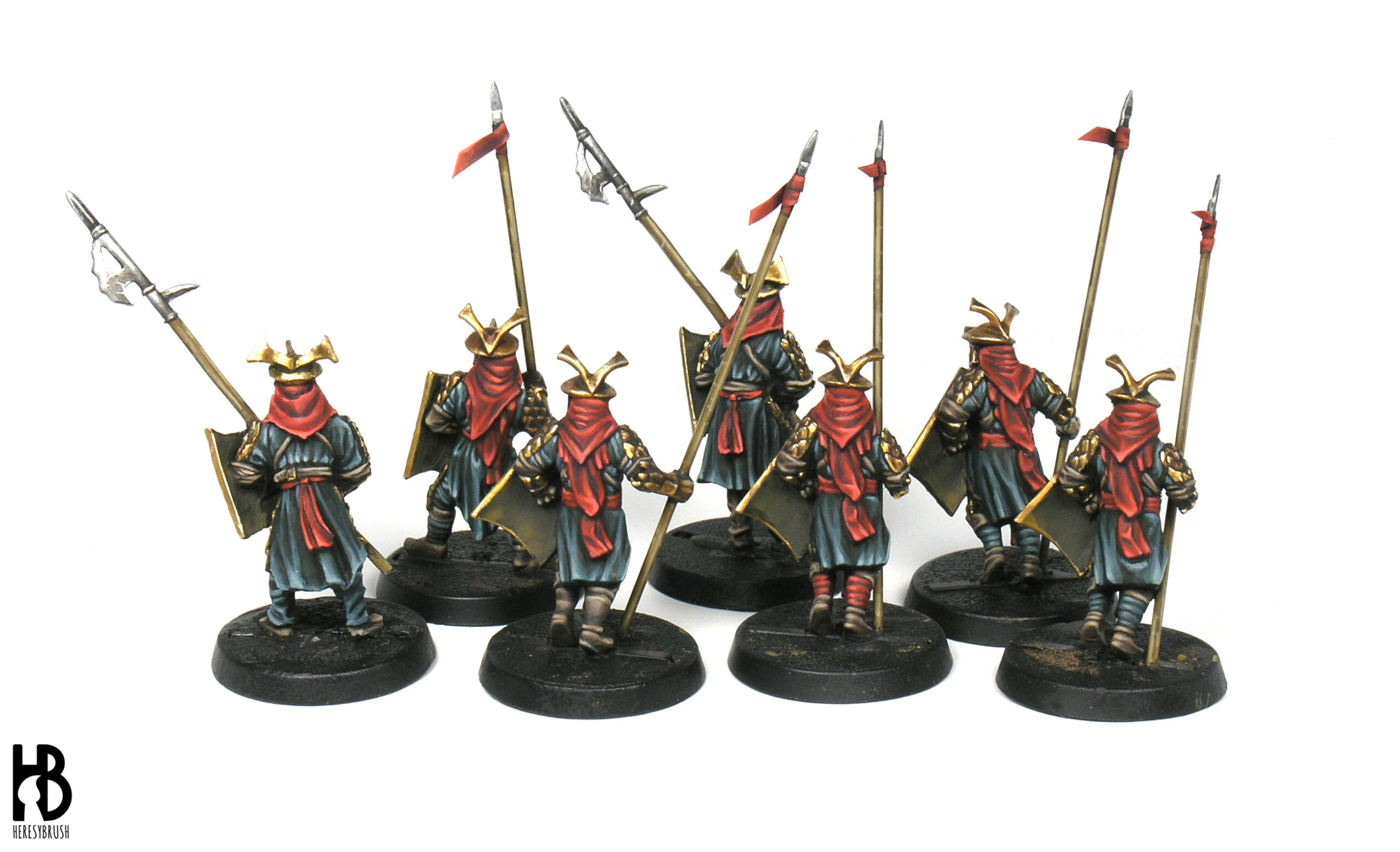 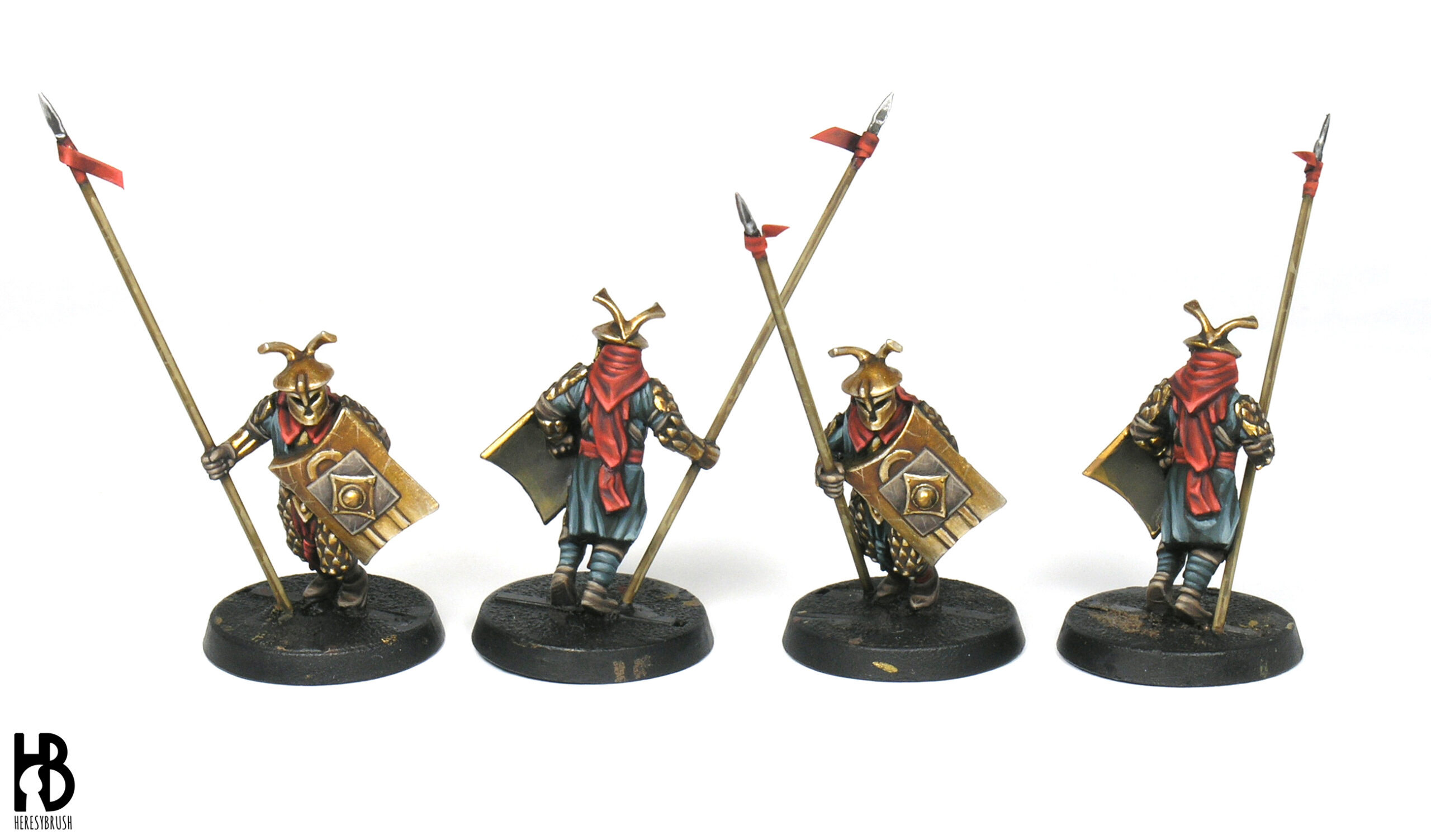