My Ph.D., Replication stress and Damage Tolerance in Mammalian mitochondria 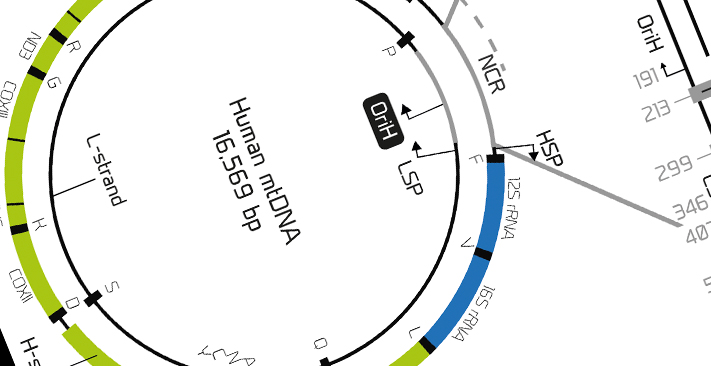 During ten years I have shared everything I know about painting and modelling in this blog. Today, I would like to share something else: what I know about mitochondrial DNA. Painting and modelling are two of my major hobbies. But another one is science. In the last four years I have developed a research project in the field of molecular biology, addressing how animal mitochondria produce new copies of mitochondrial DNA (see below). Yesterday, I had my doctoral dissertation or Ph.D defence.

In the Finnish system (I did my PhD at University of Eastern Finland), the candidate gives a short talk at the beginning of the PhD defence. This talk is about the background of the research project and why this study was important for the society. This is the so-called lectio precursoria, and mine was this:

Animals, such as humans, need to breathe oxygen and eat food in order to survive. But, why?  Just like a car, humans need fuel to function, and we obtain this fuel from fats, carbohydrates, and proteins that are ingested through food or extracted from stored body fat. And with the help of the oxygen we breathe, cells convert food into energy, so that our body can function properly and even create heat. This conversion of food and oxygen into cellular energy occurs in the mitochondria. For this reason, mitochondria are popularly known as the “power houses” of cells.

But what are mitochondria exactly? If we take a close look at one of our cells using a microscope, we can distinguish different parts within it: there is the nucleus, which contains the chromosomes or genetic information, and there are a number of small structures called organelles. Some of these organelles are mitochondria. At the dawn of the evolution of eukaryotic cells, the mitochondrion was a free-living organism similar to bacteria that established a symbiotic relationship with another free-living organism, forming the primitive eukaryotic cell. This implies that we have another living being inside our cells.I hope that you will be able to sleep tonight after hearing this!The existence of this being has an additional and very important implication: mitochondria have their own genome, the mitochondrial DNA.  This means that our cells contain two different types of DNA: nuclear DNA present in the nucleus and mitochondrial DNA in the mitochondrion.

Like a car without fuel or a phone without battery, our cells cannot function properly without energy. Therefore, defects in mitochondrial function can result in a group of metabolic disorders known as “mitochondrial diseases,” which can affect any organ system and appear at any age. These are caused by mutations in mitochondrial genes or in nuclear genes whose products are mitochondrial components. Symptoms include growth problems, muscle weakness, visual and hearing problems, learning disabilities, heart diseases, neurological problems, and many others. These diseases are rather common and affect around 200,000 Europeans and many more worldwide. Unfortunately, there are currently no cures for these conditions.These diseases are underdiagnosed and always progressive, and they often lead to premature death.  Research is the only hope for those suffering from these illnesses. However, the importance of mitochondria extends beyond this group of diseases, since mitochondrial dysfunction has been found to be involved in other more common disorders, such as obesity, diabetes mellitus, Alzheimer’s disease, Parkinson’s disease, cancer, and even aging.

The accumulation of damaged mitochondrial DNA is one of the primary causes underlying mitochondrial diseases. These damage can result mutations, including: point mutations, deletions of genes, or mtDNA depletion. DNA can be damaged, for example, by the ultraviolet light coming from the sun (this is the reason we need to use protective sunscreen). Or DNA can also be damaged by reactive molecules known as “free radicals,” which can oxidize and damage DNA and are mainly produced in mitochondria.

Mitochondrial mutations can arise when DNA damage is not properly repaired. However, the main source of mitochondrial DNA mutations is DNA replication, the process by which mitochondrial DNA is copied. As an analogy, imagine that DNA replication resembles a jacket zipper, with the DNA strands being copied as the slider moves and opens the zipper. The slider is the replication machinery and the zipper teeth are the DNA building blocks that are being replicated. However, in nature, nothing is perfect. The slider or replication machinery can make a mistake and copy the wrong DNA building block, creating a mutation. But many of you probably have, at some point, tried to open your jacket and discovered that the zipper is stuck, for example because one of the teeth is slightly bent. This resembles what happens when the DNA replication machinery encounters a blocking DNA damage. Replication stops, provoking replication stress, which have important implications for genome stability.

But the answer might be around the corner. Because of the evolutionary history of mitochondria, the mitochondrial DNA replication machinery in animals resembles that found in bacteria and phages (viruses that infect bacteria). And these organisms have been widely studied in the past, and they provide an important source for understanding how replication might work in mammalian mitochondria. We know that bacteria use a number of different strategies to cope with replication stress. For example, DNA damage can be bypassed with a special type of DNA polymerase, or replication can be restarted by different means. Similarly, the eukaryotic nucleus has comparable mechanisms. And mitochondria contain some nuclear-encoded proteins. Therefore, it is clear thatreplication stress can be overcome in other systems. And the question that arises is whether this is also the case in mammalian mitochondria.

However, despite the advances made in the last 40 years in this field, there is an important lack of consensus regarding the mechanism by which mammalian mitochondrial DNA is replicated. Five different mechanisms have been proposed, and an active debate is ongoing. We are still far from a consensus. This is of particular importance for mitochondrial diseases, because it makes more difficult to understand the mechanism by which some of these diseases emerge. If we do not fully understand how mitochondrial DNA is copied in first place, it is difficult to comprehend how problems related with this can arise.

Therefore, in this study, I attempted to acquire a deeper understanding of how mitochondrial DNA is replicated in mammals and which strategies can be employed to overcome replication stress. 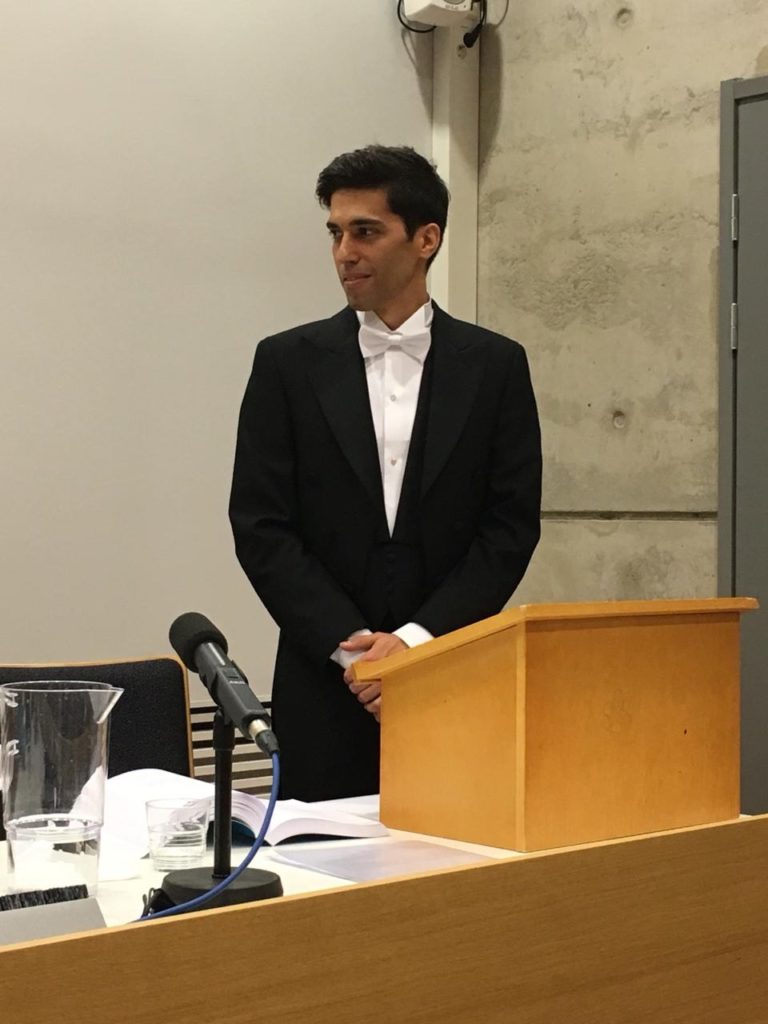 After my initial speech the opponent remarked the most important discoveries of my work. My opponent was professor H. T. Jacobs, one of the greatest contributors to my field. Then, the funny part starts: the discussion or defence per se. During 90 minutes the opponent and I discussed about my work. I did not expect it, but I really enjoy this part; and it was thanks to my opponent. This was followed by a small celebration with coffee an cake, and a larger celebration during the “karonkka” or dinner party. This dinner is full traditions, including a number of endless speeches. In sum, this was an amazing but extremely stressful day. But achieved one of my dream, becoming a Doctor in Molecular Biology. This would have been impossible with the support of many people, including my colleagues and supervisors, friends, family and my girlfriend. Thanks you all!

The PhD thesis is based on the following scientific articles:

But…after all, there was some painting and modelling involved in this, since I painted a small vignette for one of my supervisors (the second supervisor got a lithography of a mitochondria): 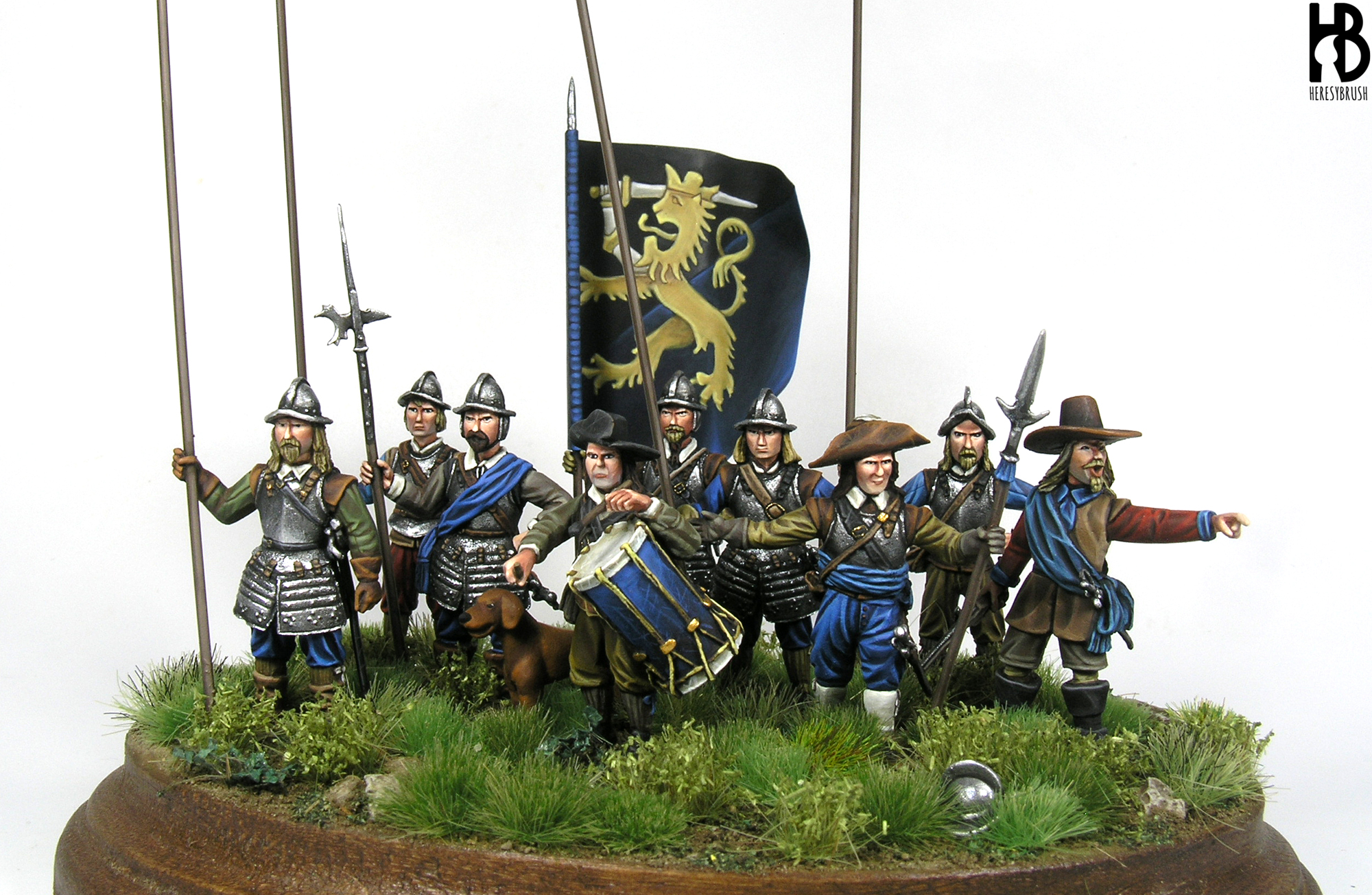