War in the Middle-East

Over the last years I have been commissioned to paint plenty of miniatures featuring the Middle-East conflicts we have sadly seen in the TV lately. I am the first one who consider that there might be something wrong with this… when these conflicts are very close in time and space. But let be honest. As wargamers we do not require much motivation to start collecting and painting tiny miniatures. Just a book, a movie…or the BBC channel. We like to simulate any conflict and play one of our “chess games”. And this has nothing to do either with the war per se nor with our political viewpoint. In this regard, and taking into account that I am also an airsoft player, I have been asked several times something like “why do you like war?” or “why do you support war?” My thunderstruck face is always followed by a “Sorry, what?” and then I try to explain what we do here… Honestly, it is like saying that people who likes action movies, video games or who likes sports such as fencing, archery, boxing, and so on also support violence and war. For us, this is only a strategy game and a manifestation of our love for history (I regret to inform you that sadly our history can be told only throughout wars). It is a competition against an opponent in equal conditions to see who is the smarter one.  You, the reader, are probably a wargamer too. What do you think about this? Have you been ever asked the same question? 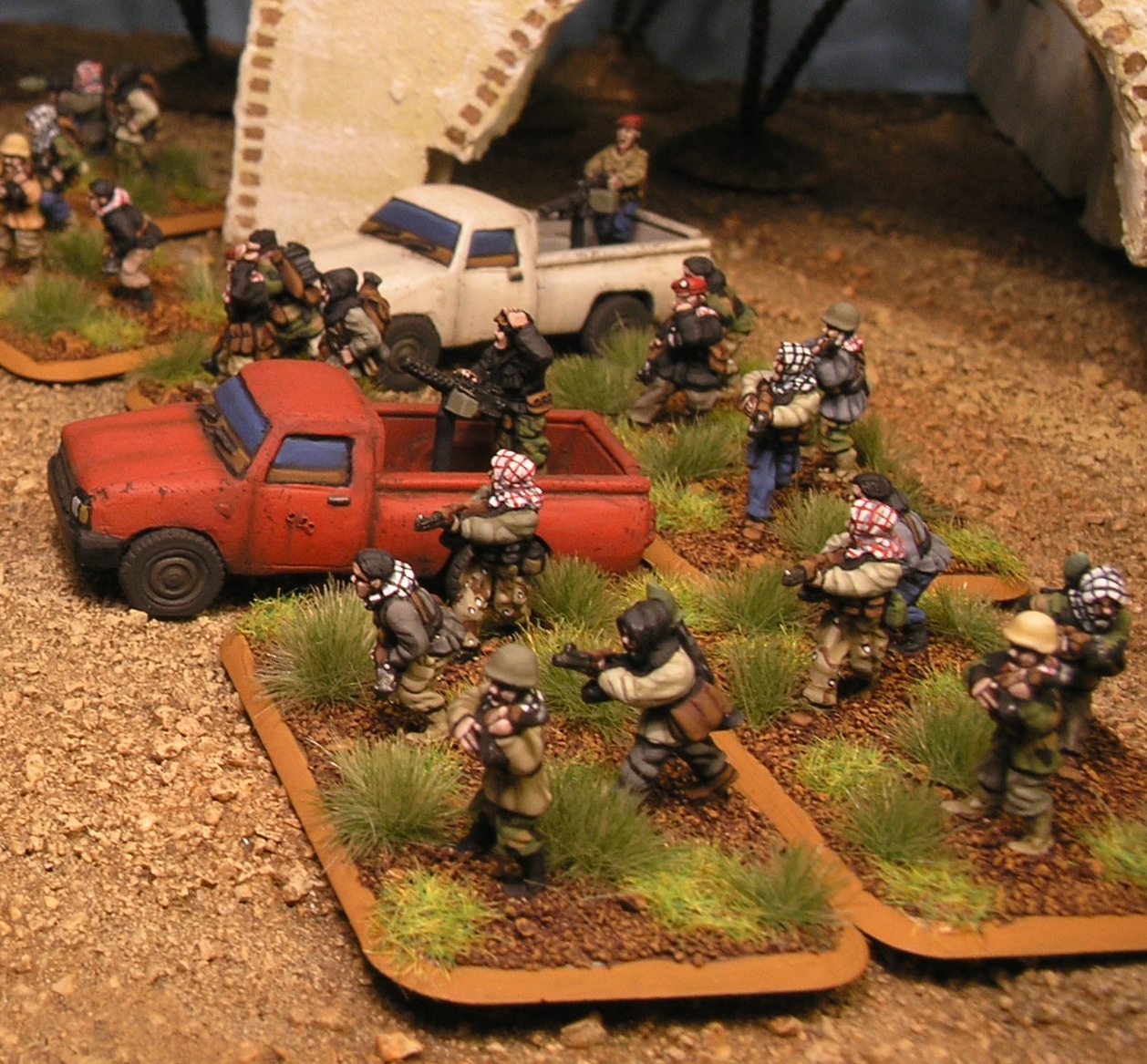 Nevertheless, I wanted to share with you some painting tips. In the following lines you will find a short historical introduction (basically based on Wikipedia) followed by some painting tips and a color chart featuring five different factions of Middle-East conflicts: Afghans (Taliban), militiamen, Syrian, Peshmerga and Professional Military Contractors (PMC). All these miniatures are 15mm and are from Khurasan miniatures. In addition, I have included a small historical article in this post which I wrote long time ago for an extinct Spanish wargames magazine about an US army operation during the Iraq War. Unfortunately, this is only in Spanish; although you can use google translator to check it out. Or just enjoy the battle scenes. In this other case, the miniatures are mostly from Peter Pig and some vehicles from Old Glory.

During the last part of the XXth century Afghanistan has been shaken by constant military conflicts. In 1978, the rise of the communism resulted in a civil war between the communist government and the guerrilla muhjahideen. The initial support of the Soviet Union to the government finally turned out in the entrance of the СССР in the civil war. Meanwhile, USA braced the guerrilla. Nine years later (1989), the Soviet Union withdrew and abandoned Afghanistan although continued to support the communist government.  Without the Soviet troops in Afghanistan, the civil war escalated soon. In 1990 the state officially became Islamic and the communism was abandoned. However, this as not enough to suffocate the conflict. Soon another movement appeared in 1994: the Taliban, a political-religious force, who finally took control of Kabul, stablishing the Islamic Emirate of Afghanistan. Their remaining enemies formed the Northern alliance and fought back. However, the Taliban, supported by the neighbor countries, easily maintained the power. From 1996 to 2001 the al-Qaeda started to operate inside Afghanistan, resulting in the September 11 attacks in the United States supposedly orchestrated by Osama bin Laden. Several weeks later, USA and UK launched the “Operation Enduring Freedom” and started bombarding Afghanistan while supporting the Northern alliance with the deployment of several thousands of soldiers. After overthrowing the Taliban government, an “International security Assistance Force (ISAF)” was established by the UN in order to help to the new government. On the other hand, after losing control of the country, the Taliban began an insurgency to regain it. Thirteen years later, the US war in Afghanistan finished in 2014; although thousands of NATO soldiers continue to help and provide security in the country nowadays. 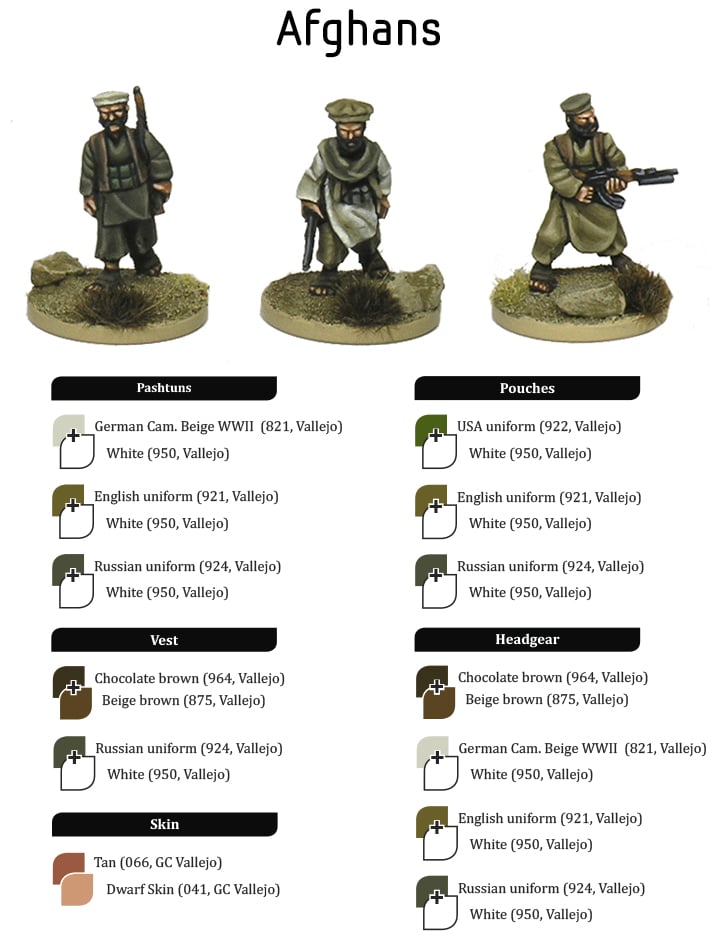 Guerrilla groups such as Taliban are irregular soldiers; and therefore, they are mainly dressed in civilian clothes such as the typical payraan tumbaan (loose trousers and long shirt without bottoms, both of the same color), kurta (long shirt) or / and vest. Since these are civilian clothes, we can use any color. However, the range is limited to white and different brown colors. We can combine these in different ways to reinforce the irregular feature of these forces. The same is applied when painting the headgear, including turbans or the classical pakol. A painting tip: we can easily increase the variety of brown colors even when we do not have many by applying different highlights. That is, we can use the same base brown color (let say, chocolate brown) but then use different colors when painting the highlights (i.e. mix the chocolate brown either with white OR yellow).

There is not much to say about these militiamen that we do not know yet. We can essentially find these irregular soldiers in any conflict in the Middle-East, from the Iraqi insurgency after the US invasion of Iraq to the recently created Islamic State or Dā’ash, or in the Free Syrian Army. Mostly armed with the omnipresent Ak47 and other Russian gear, sometimes they can even carry captured Western weapons. 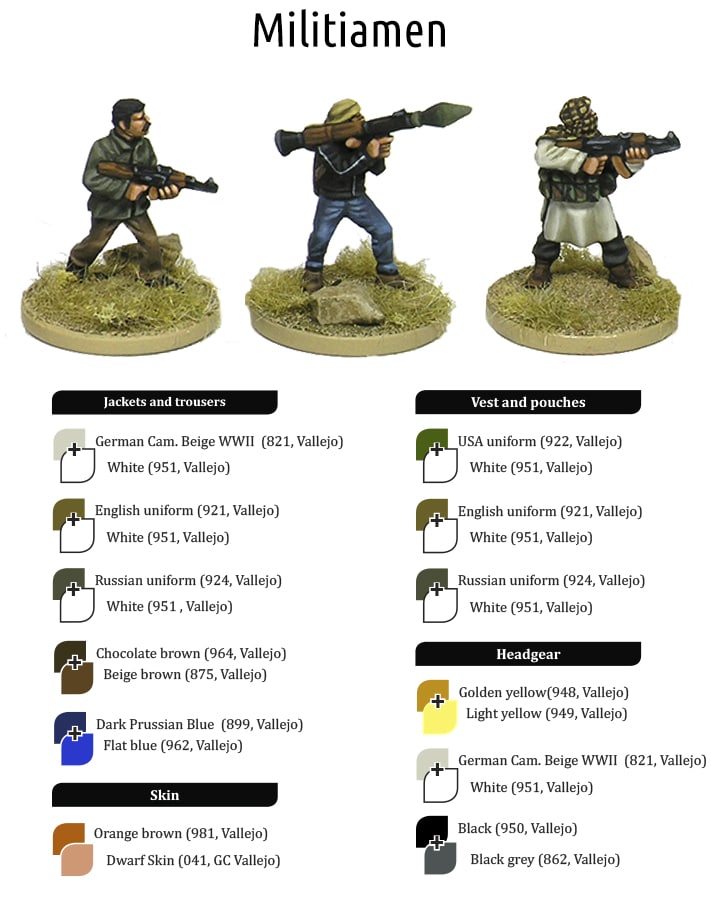 These miniatures are very grateful to paint since “everything goes”. They are irregulars; and therefore, we can use any color to paint the clothes, from jeans to tracksuit; and we are also free to paint full metal guns (totally black, featuring the modern AK74) or guns with wooden stock and handguard like in the classic Ak47, for example. I have to confess that I really like to paint…tracksuits: first paint the cloth in any color and then just paint a couple of fine white lines along the sleeves of the jacket or pant legs.

Peshmerga (“He who confronts death”)

The autonomous region of Iraqi Kurdistan is defended by the –irregular- military forces so called Peshmerga, since the Iraqi army is not allowed from entering in this region. During the Iraq War, the Peshmerga helped the coalition forces in their fight against Hussein’s military forces and later on against al-Qaeda. In the recent years, after the rising of the Islamic State, Peshmerga and other Kurdish groups are bloody fighting against the IS threat in Iraq and Syria. Due to the special condition of the Iraqi Kurdistan region, their arsenal is pretty limited and mostly relies in captured equipment. However, since the ISIS offensive in 2014, they are receiving some light supplies from different countries. 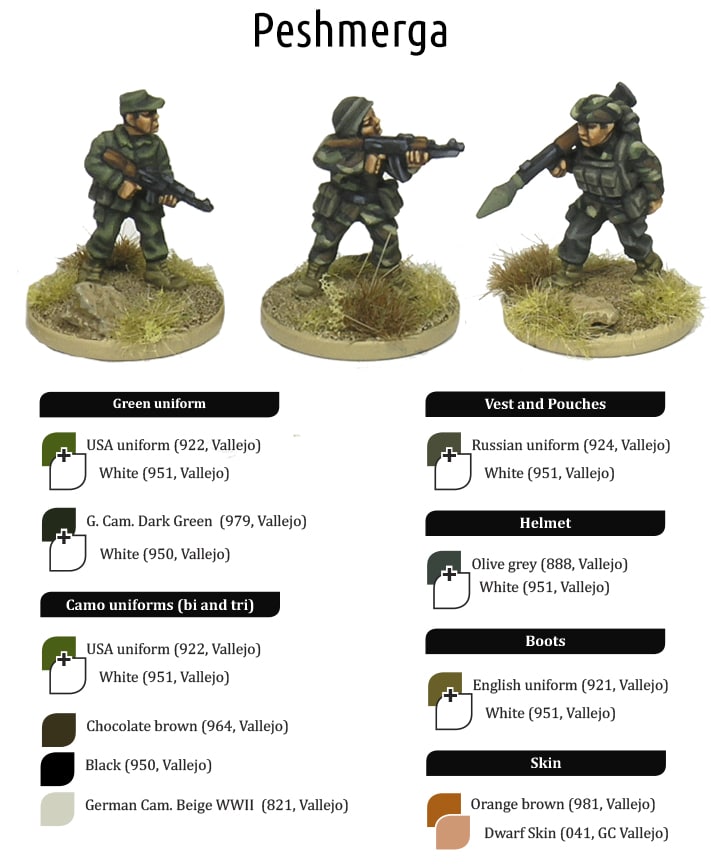 As irregular forces, we can find very different combination of gears. We can recreate this by combining different camos –or just a plain color– in our miniatures. I do not only mean to paint one miniature with camo “A “, and then another miniature with camo “B”. Not only that. We can also mix camouflage patterns in jackets and trousers. We could also paint the vest and helmet with a different pattern. There are many options. One painting tip for the camos: depending on the camo sometimes is advisable to apply a smooth highlight on the camo spots. For example, we can use grey one black spots or a light brown on dark brown ones. By doing this we obtain a “cleaner” effect: the spots are more defined and the camo pattern is easily identified. However, do not abuse of this effect. Remember, apply smooth lights!

As a result of the Arab spring protests, the discontent with the Syrian President Bashar-al-Assad escalated and ended up in a civil war in March of 2011. Although there are several factions involved, we can essentially divide them between the Syrian government (including the Islamic State or Dā’ash) and the Free Syrian Army. The Syrian government is military supported by Russia and Hezbollah; meanwhile the NATO lately attacked the IS by air and sea. It is noteworthy to mention that both groups have been accused of severe human rights violations, triggering one of the largest immigrations crisis we have ever seen. 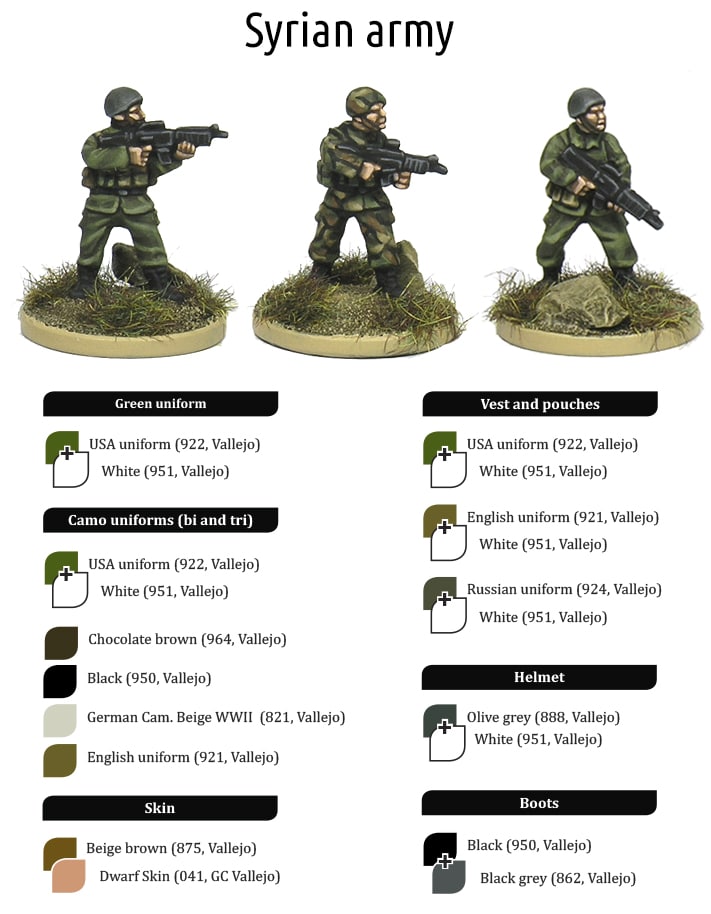 Syrian soldiers are dressed both in old Soviet Union uniforms and in more modern gear. Therefore, we can follow exactly the same idea we discussed about the Peshmergas, and combine different patterns of camouflages.

Perhaps better known as “security contractors” or just “contractors”, are corporate-type soldiers that provide security or combat services. It is very interesting to mention that the UN consider PMCs as mercenaries and do not approve them, although it is a bit worthless since some countries such as Russia, UK, China and USA did not sign this convention. Their services are very diverse, from military trainers or advisors to bodyguards or security providers. And sometimes, they are even used as offensive forces. They are war veterans with their own gear, and actually they might look very similar to some US army special ops. The Typical loadout is geared more towards civilian clothing with body armor underneath. Note that technically all contractors are “non-combatants”, and therefore, in principle they are not allowed to use camo gear. 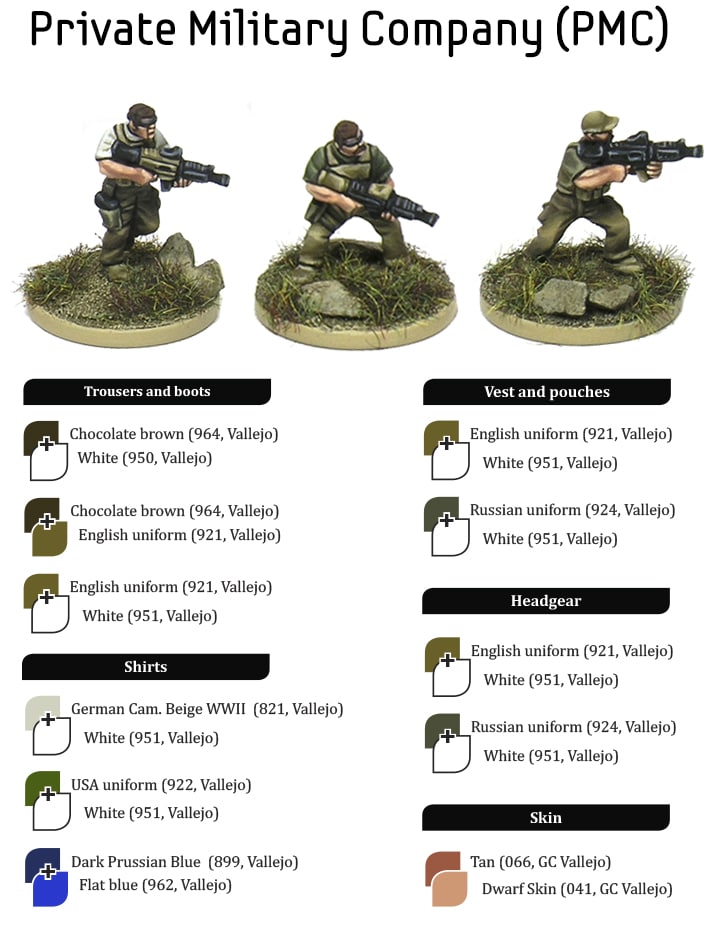 Like the Middle-East militiamen, we have some freedom when painting these miniatures. Since they resemble civilians we can use any color for the clothes, although they normally wear tan or camel (good “camo” for the arid regions). While I widely varied the T-shirt color, from white to blue; I essentially used the same color for trousers and vest: English uniform (921, Vallejo) highlighted with white. To add a little bit more of variation in some cases the base color was a mixture of English uniform and chocolate brown, which resulted in a darker tone. In addition, we can also paint some gun elements, such as ACOGs, rails, stock and so forth in tan/camel. The idea is to simulate that each veteran has personally customized his gun.

Here you can see some 15mm vehicles either from Khurasan minaitures, Peter Pig or QRF, basically featuring the Syrian army or arab militias. 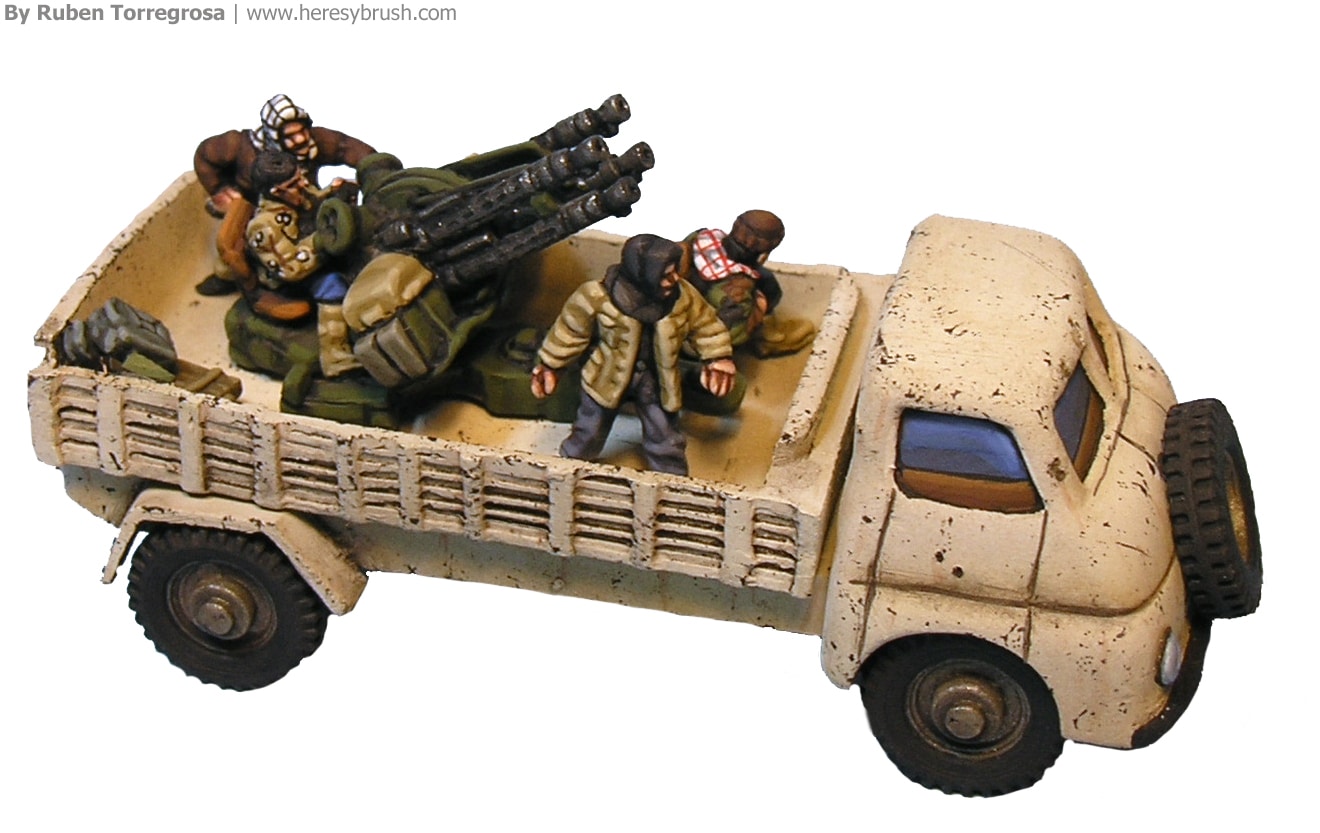 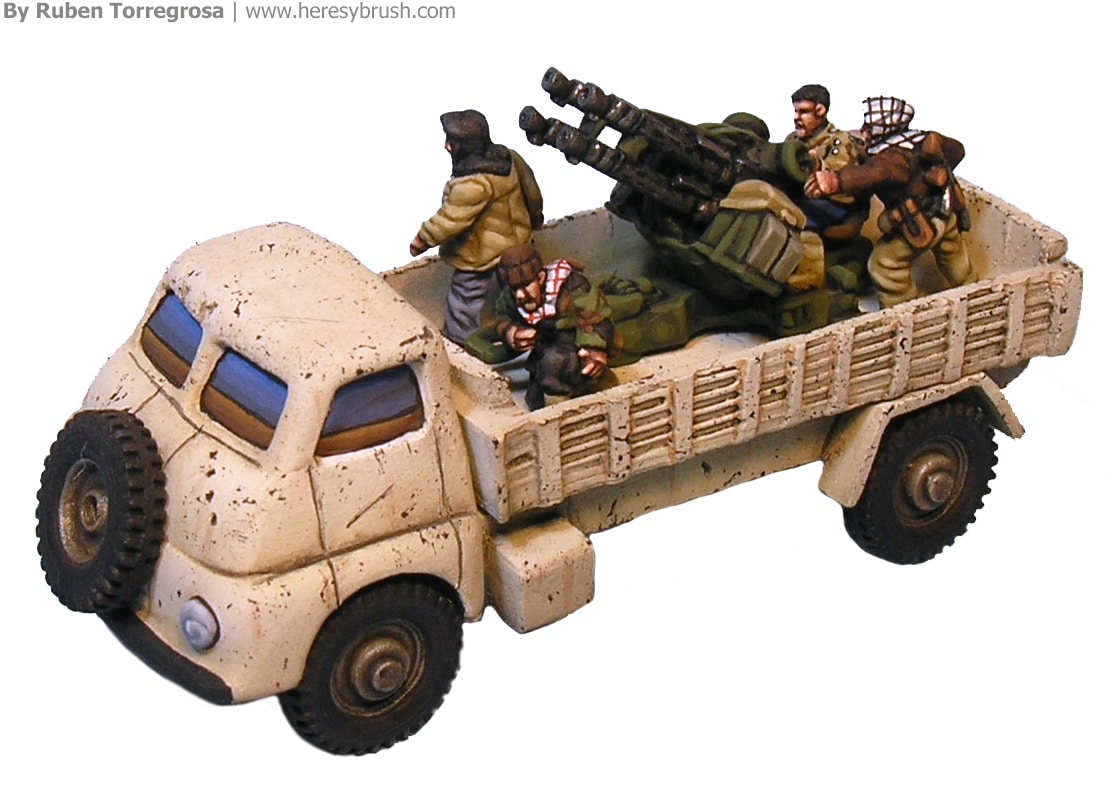 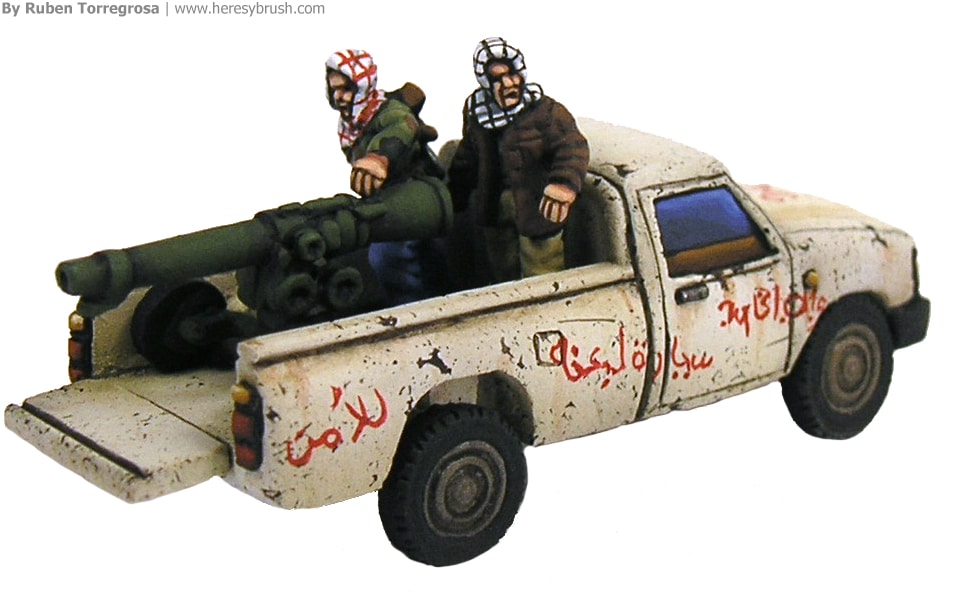 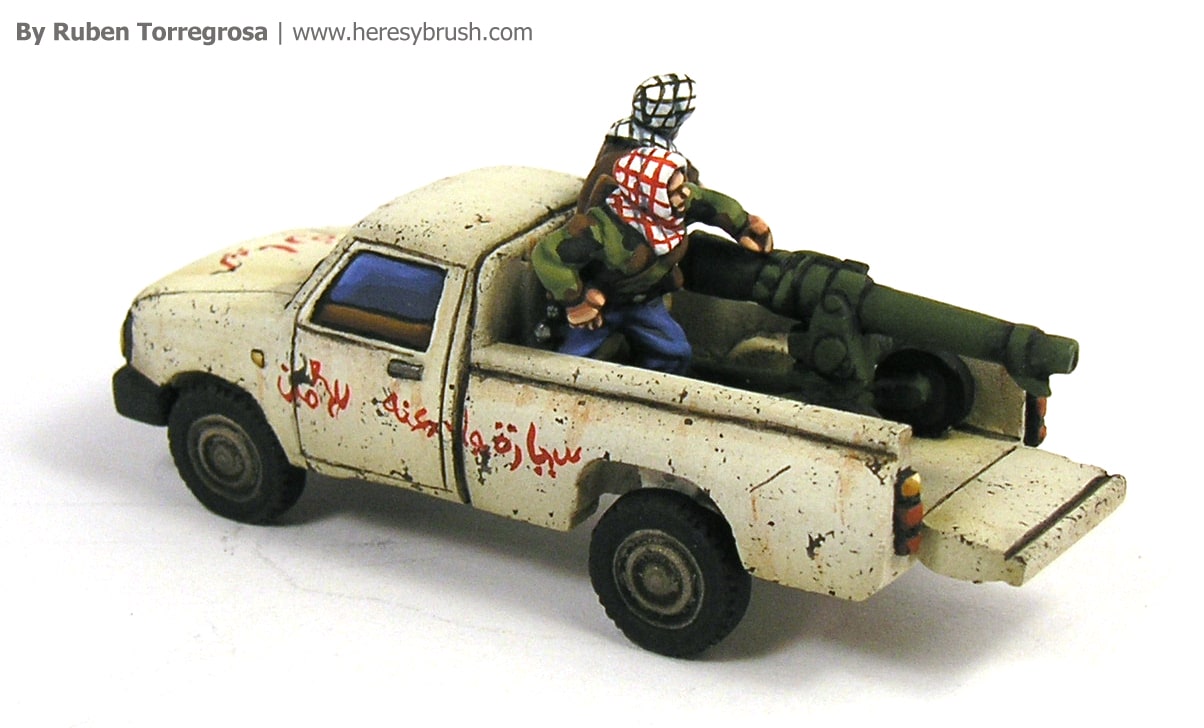 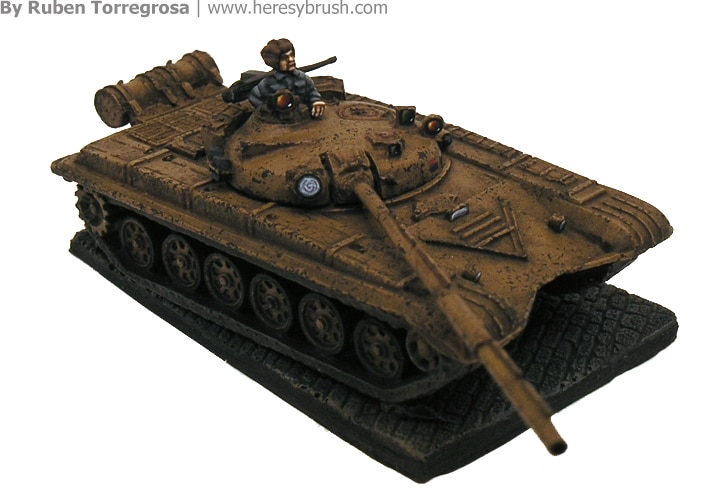 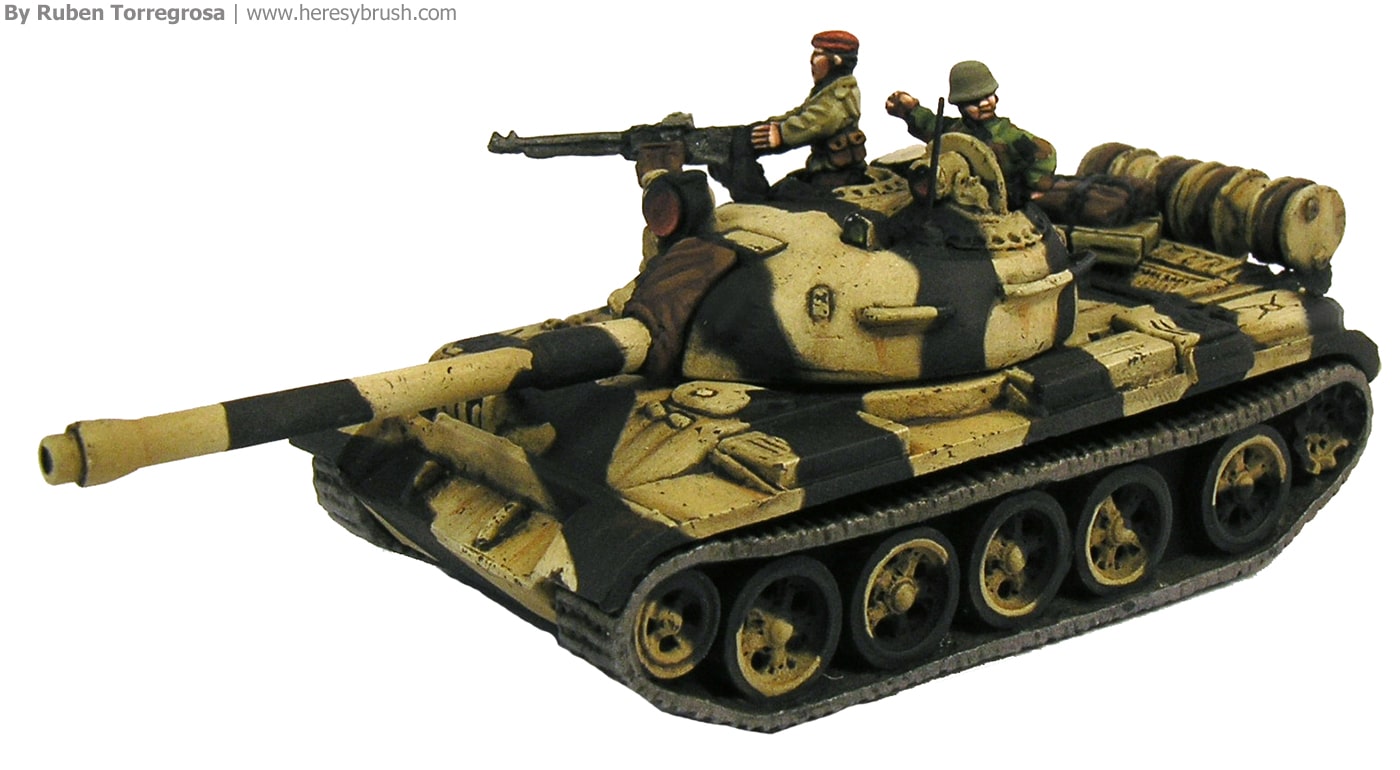 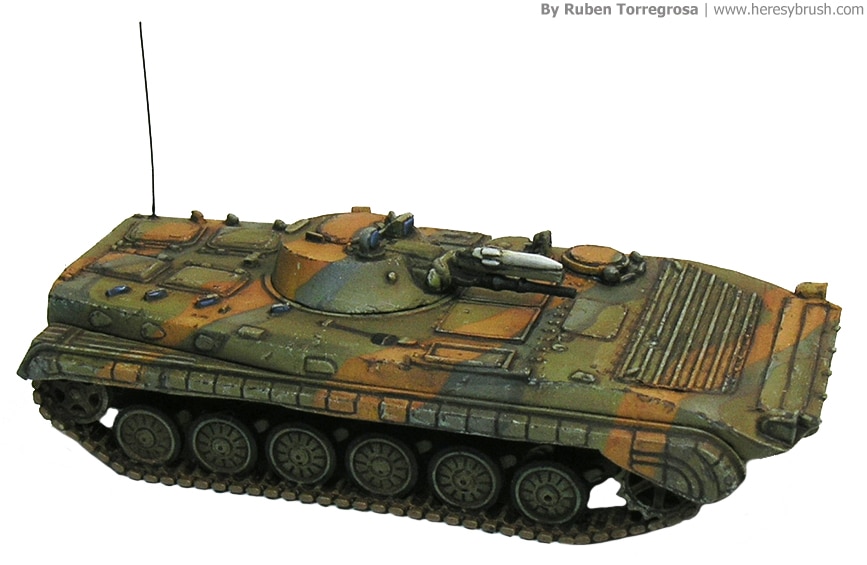 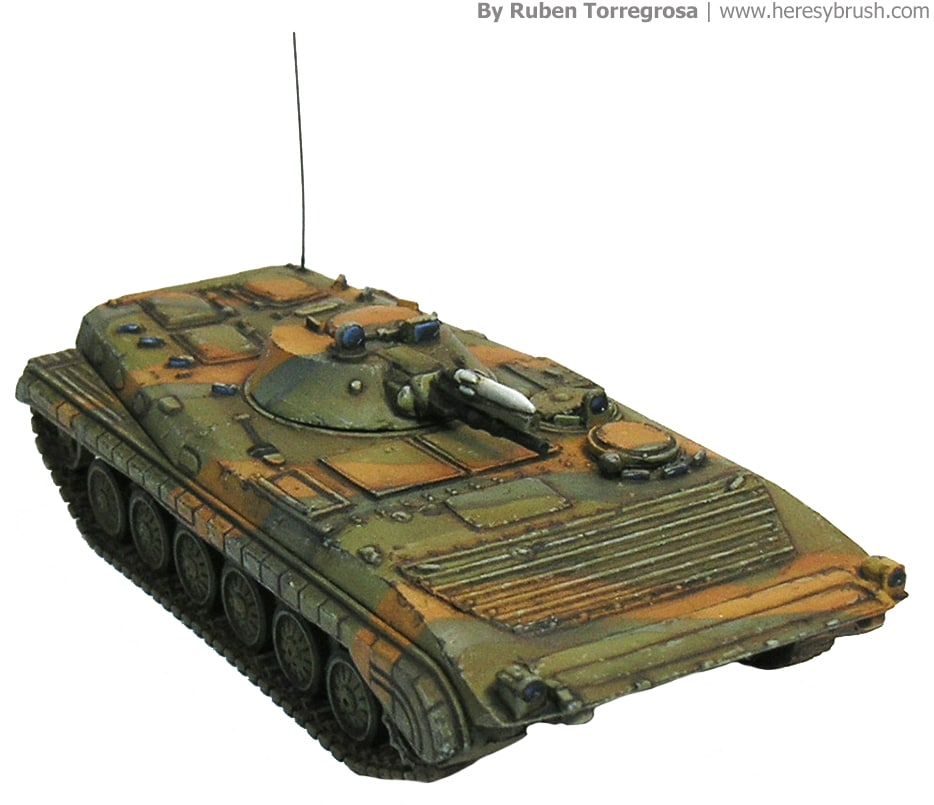 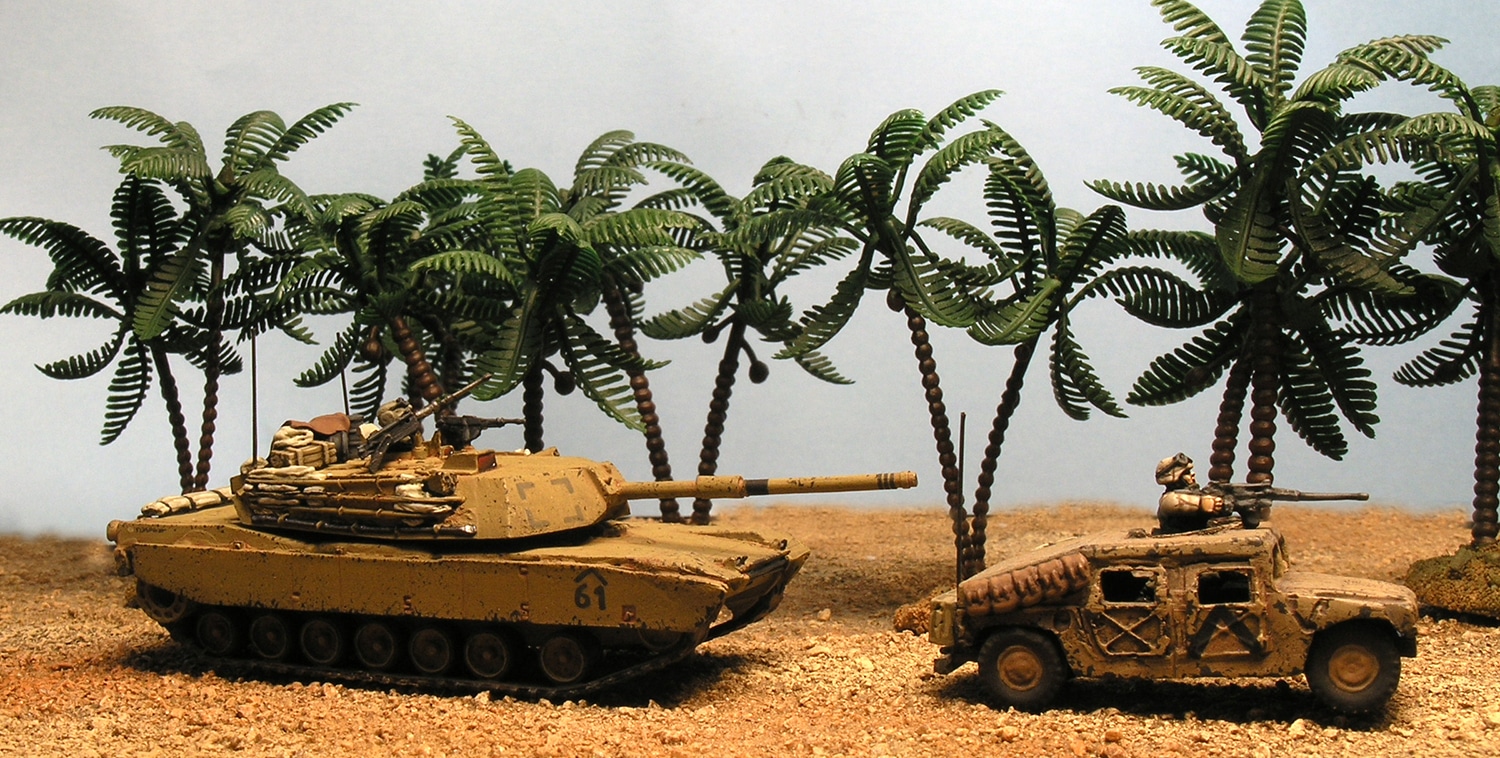 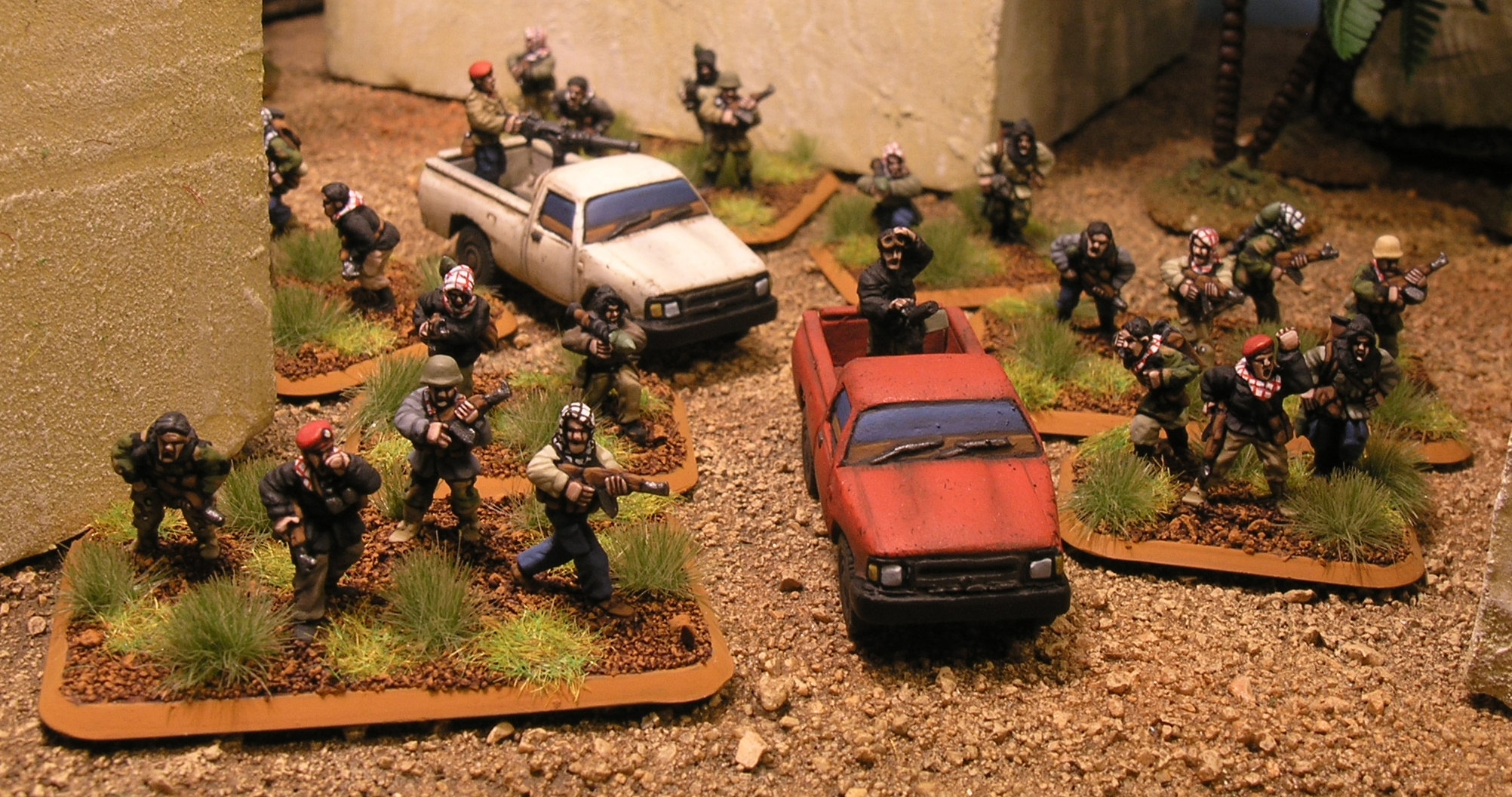 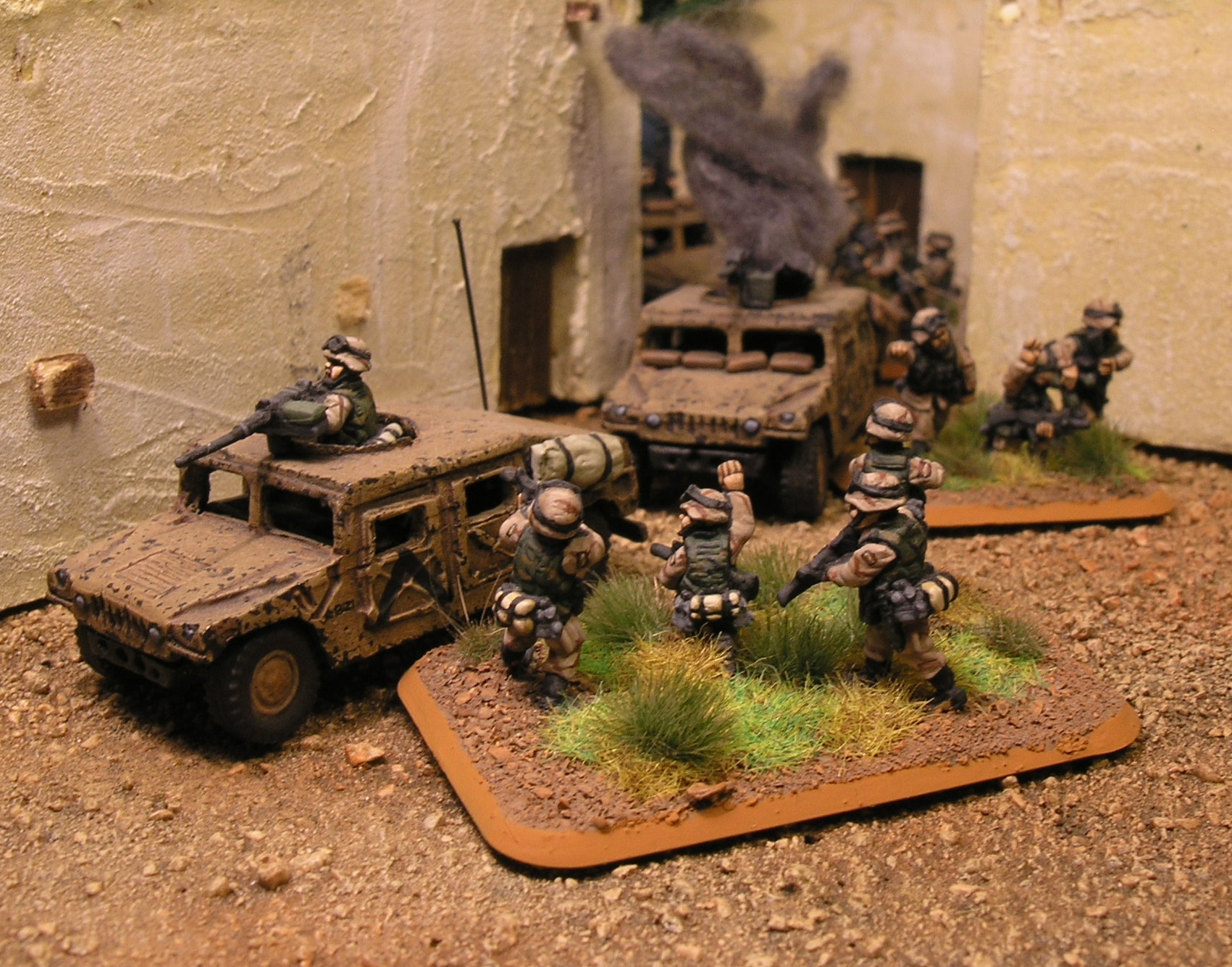 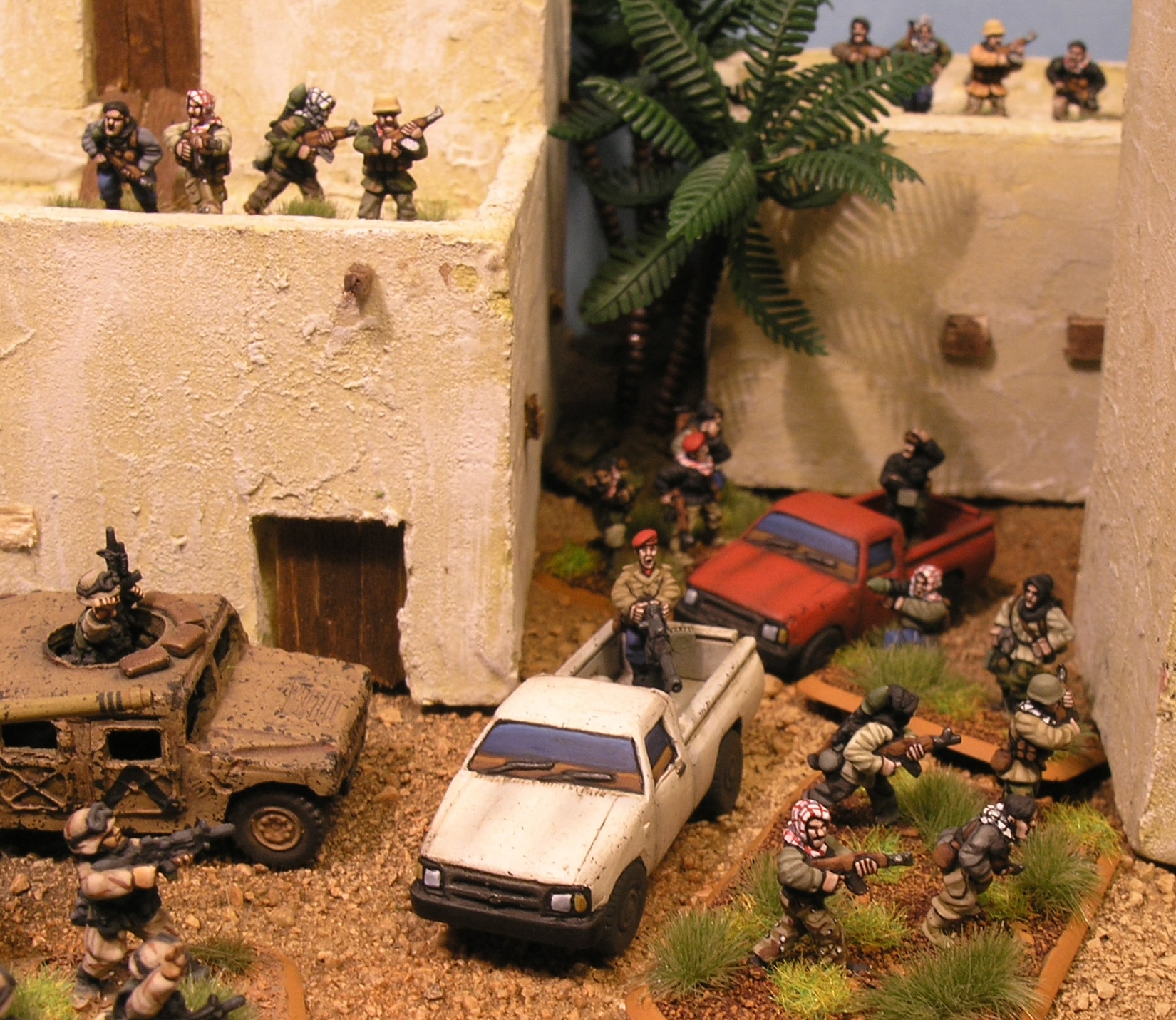